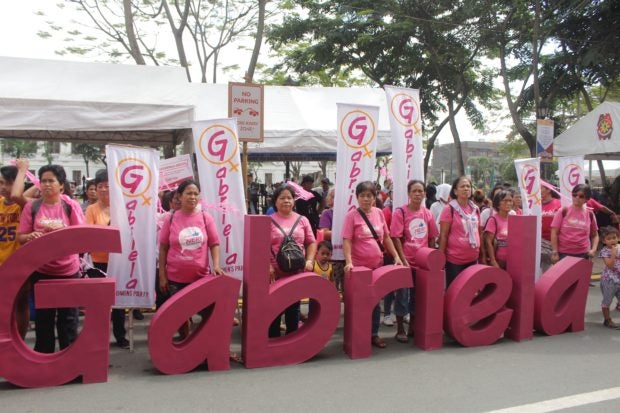 The Gabriela Women’s Party (GWP) has strongly condemned President Rodrigo Duterte’s spit remark on women, saying this “further contributes to the degradation and disrespect of women.”

In a speech at the MassKara Festival in Bacolod City, Saturday, the Chief Executive dared his critics to spit on his face if they could prove their allegations of hidden wealth against him.

READ: Duterte: Spit on my face if I have hidden wealth

“It is reprehensible that the President chose again to engage in his gross macho antics at a time when majority of Filipino women live a hand-to-mouth existence due to skyrocketing prices and depressed wages,” the women’s group said in a statement on Sunday.

“We lament that this further contributes to degradation and disrespect of women, and disturbingly sets a very bad example for our children,” it added.

Gabriela also said anyone would spit on Duterte’s face for his rudeness and indecency.

The group further warned the President against covering up the country’s economic woes with his vulgarity.

Duterte previously faced criticisms after he kissed a Filipina in front of other overseas Filipino workers (OFWs) while on an official visit to South Korea.

Gabriel slammed this as “unethical,” “misogynistic,” and shows lack of respect to women. /cbb