Signal No. 1 up over several Luzon provinces as ‘Rosita’ approaches 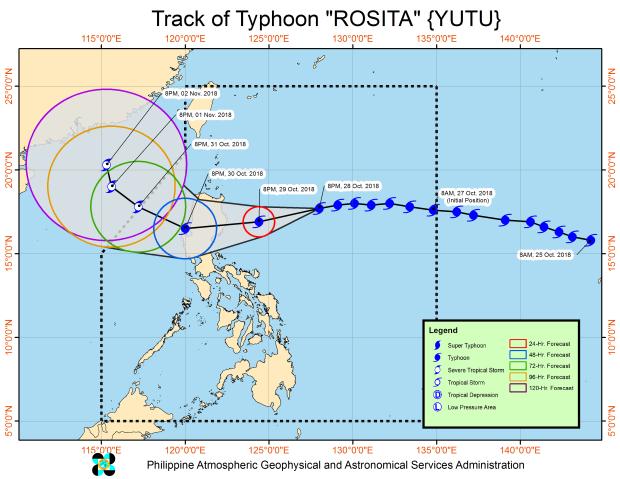 Typhoon “Rosita,” though slightly weakening on Sunday, continued to threaten Northern Luzon, with Tropical Cyclone Warning Signal No. 1 raised over the following areas of Luzon, according to bulletin released at 11:00 p.m. on Sunday by the Philippine Atmospheric, Geophysical and Astronomical Services Administration (Pagasa):

On Monday morning, Pagasa said it mmight raise Signal No. 2 over the provinces of Cagayan, Isabela, Quirino and Aurora.

Storm surges are possible in the coastal areas of Cagayan, Isabela, and Aurora.

Strong to very strong winds are expected blow through the eastern sections of Northern and Central Luzon starting Monday. These areas may also have moderate to heavy rainfall.

Flooding and landslides are possible. Travel by land and sea is risky.

Sea travel is risky over the seaboards of Northern and Central Luzon and the eastern seaboards of Southern Luzon, Visayas, and Mindanao.

On Monday, Pagasa may also raise Signal No. 1 over Metro Manila.

The typhoon – internationally known as “Yutu” — is expected to make landfall over the Isabela-Aurora area by Tuesday morning and may exit the Philippine area of responsibility (PAR) by Thursday.

It was moving west at 20 kph with maximum sustained winds of 180 kph near the center and a gustiness of up to 220 kph. /atm