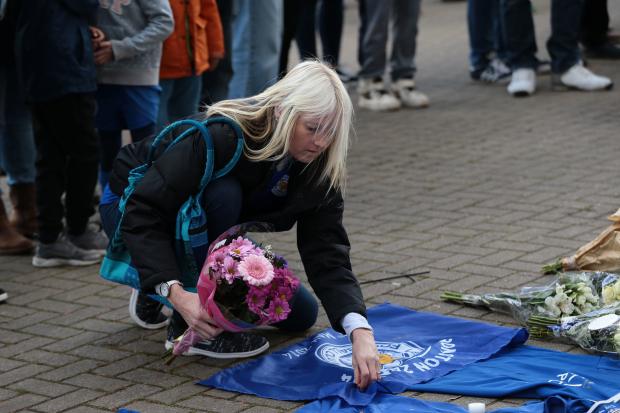 A woman places flowers outside Leicester City Football Club after a helicopter crashed in flames the day before, in Leicester, England, Sunday, Oct. 28, 2018. A helicopter belonging to Leicester City’s owner, Thai billionaire Vichai Srivaddhanaprabha, crashed in flames in a car park next to the soccer club’s stadium shortly after it took off from the field following a Premier League game on Saturday night. (Photo by AARON CHOWN / PA via AP)

LEICESTER, England — Flowers and wreaths were laid outside Leicester City’s stadium on Sunday as investigators looked into the circumstances behind a helicopter, belonging to the English club’s Thai owner, crashing in flames next to the ground.

There has been no official statement about who was on board the helicopter that plummeted to the ground shortly after it took off from the field following a Premier League game between Leicester and West Ham on Saturday night.

Leicester’s owner, Thai billionaire Vichai Srivaddhanaprabha, is known for arriving and leaving the stadium in his helicopter at home games.

In its most recent update, the central England club has said it is assisting authorities with “a major incident” at the stadium.

Small bouquets, soccer jerseys and flags were left by members of the public alongside a large image of the Hindu god Ganesh, which was also propped up among the flowers. A small candle was placed in front of the flowers as people gathered at the stadium.

The 60-year-old Srivaddhanaprabha, who owns Thai duty-free retail giant King Power and is said by Forbes to be the fifth-richest person in Thailand, bought Leicester in 2010 and provided the funds that helped the team improbably win the Premier League at odds of 5,000-1 in 2016.

It was regarded as one of the greatest underdog stories in the history of sports.

Srivaddhanaprabha is very highly thought of in the city and has formed a close bond with the fans, sometimes mingling with them at games. He has been praised for his charity work, donating 2 million pounds ($2.5 million) toward a new local children’s hospital.

Leicestershire Police has said the Air Accident Investigation Branch will now be leading the investigation into the crash. Investigators have been deployed at the site. A cordon is currently in place at the scene.

One fan left a card of a fox with their flowers, reading: “Thinking of you all.” Leicester’s nickname is The Foxes.

A Women’s Championship clash between Leicester and Manchester United scheduled to be played at the King Power Stadium on Sunday was called off. The ladies reserve league match against Derby was also postponed. /atm 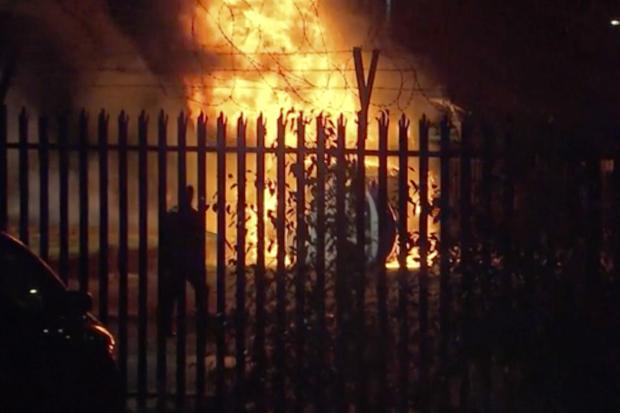 This image made from video shows a burning helicopter in a parking lot outside the King Power Stadium in Leicester, England shortly after a Premier League game on Saturday, Oct. 27, 2018. (Pool photo via AP)