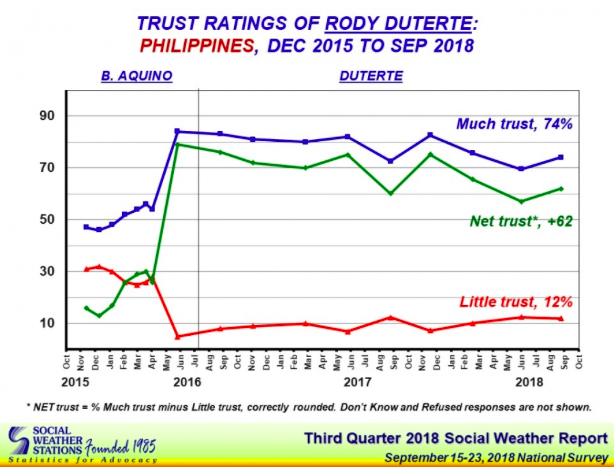 The net trust rating of President Rodrigo Duterte increased in the third quarter of 2018, remains within the “very good” bracket, according to a recent Social Weather Stations (SWS) survey. 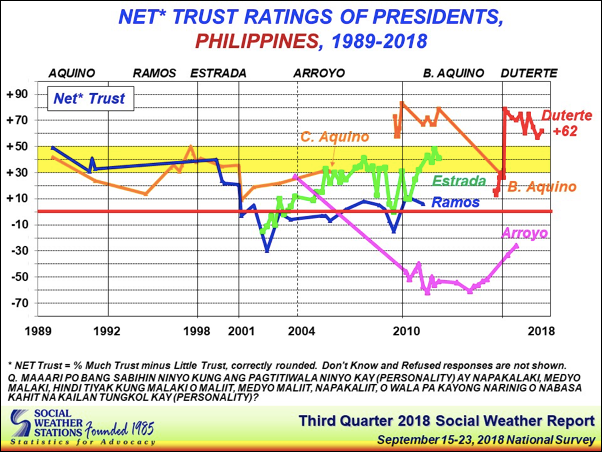 According to the latest survey, the net trust rating of Duterte rose to +62, a five-point increase from the previous quarter’s +57.

The survey, conducted from Sept. 15 to 23 via face-to-face interviews, also showed that 74 percent of the 1,500 respondents surveyed nationwide said they had “much trust” in the President.

According to SWS, the five-point increase of the net satisfaction of the President could be attributed to the increase of ratings Metro Manila and Balance Luzon, combined with steady scores in the Visayas and Mindanao.

Meanwhile, Duterte’s net rating remained “good” for the participants coming from Visayas and “excellent” for those coming in Mindanao.

The study also showed that 14 percent remained undecided, while 12 percent said that they had little trust in the President.

According to SWS, this gave the President an average net trust rating of “very good,” or plus-68, for his two years in Malacañang. /jpv /atm