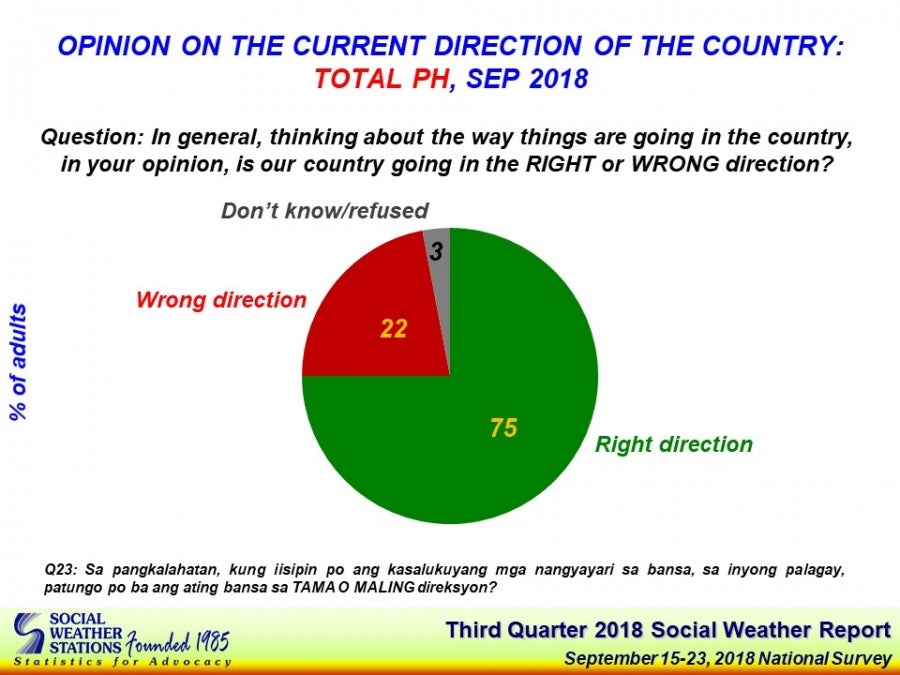 Majority of Filipinos believe that the Philippines is in the “right direction,” results from Social Weather Stations’ (SWS) latest survey show.

At that time, 25 percent said the country was in the wrong direction while 5 percent of respondents did not give an answer.

SWS said the percentage of those who say that the country is in the right direction rose in all areas and stayed highest in Mindanao.

About 89 percent in Mindanao said the Philippines is in the right direction, which was 2 points higher than June 2018 poll’s 87 percent.

In Visayas, the percentage increased by three points from 66 percent in June to 69 percent in September.

(In general, considering what is happening in the country today,  in your opinion, is the country going in the RIGHT or WRONG direction?)

The survey was conducted from Sept. 15 to 23, with 1,500 adults 18 years old and above as respondents. Three hundred respondents were interviewed each in Metro Manila, Visayas, and Mindanao, and 600 in Balance Luzon.

It had a sampling error margins of ±3% for national percentages, ±4% for Balance Luzon and ±6% each for Metro Manila, Visayas, and Mindanao.

SWS stressed that the poll on people’s opinion on the current the direction of the country was  a “non-commissioned” survey. /ee