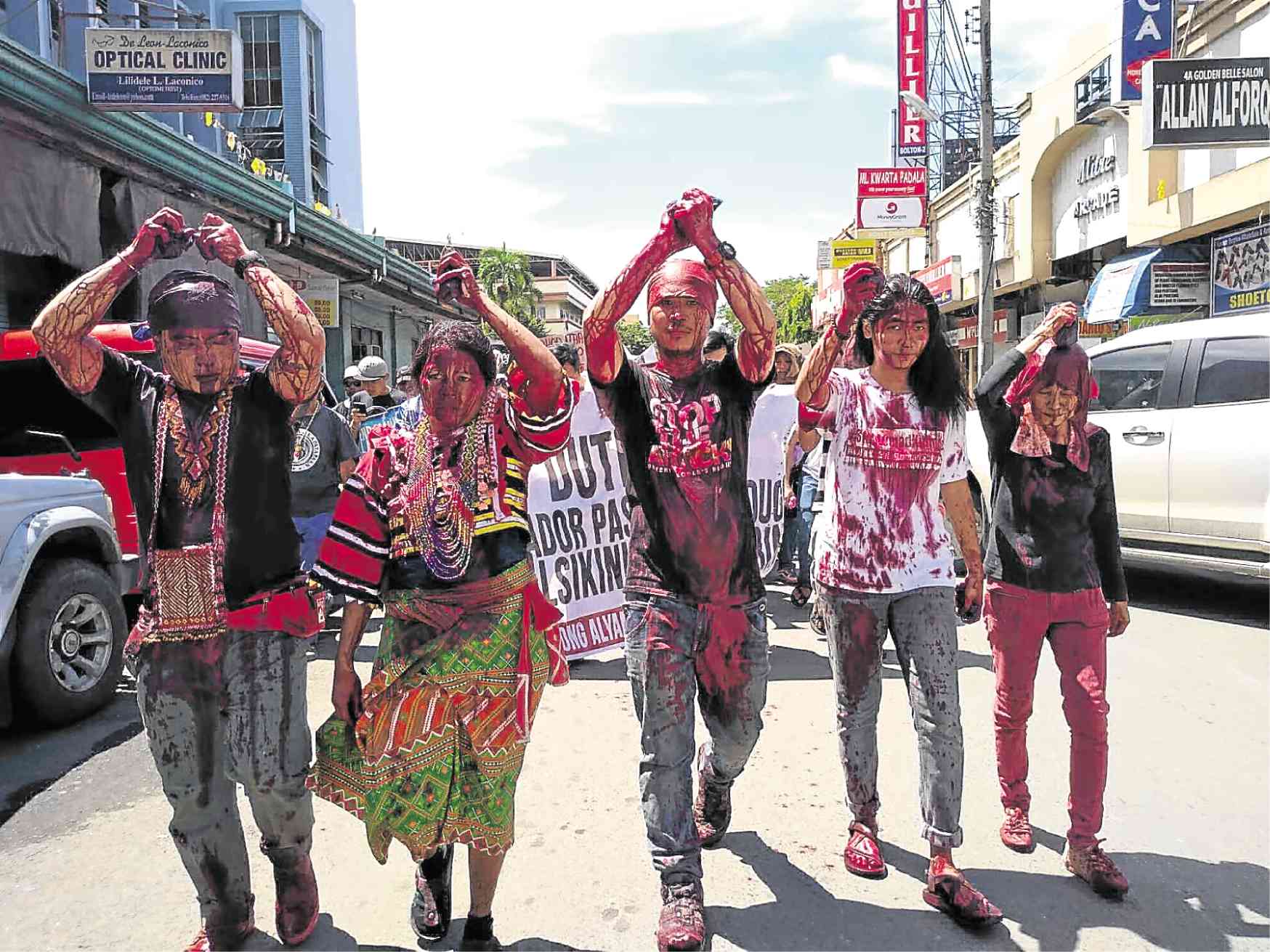 ‘BLOODY’ PROTEST Protesters in Davao City smear themselves with fake blood to symbolize human rights violations and attacks on “lumad” and activists under the Duterte administration. CONTRIBUTED PHOTO

DAVAO CITY — Activists and members of human rights groups staged a simultaneous protest rally at the  key cities in Mindanao on Tuesday to call for the lifting of martial law on the island.

In President Rodrigo Duterte’s hometown of Davao City, various groups gathered to call for his ouster in the wake of what they described as continued killings of “lumad” (indigenous peoples), Moro and farmers across the country.

The protests were held as Davao City Mayor Sara Duterte urged the public not to vote for Left-leaning party-list groups under the Makabayan bloc after members of the militant labor group, Kilusang Mayo Uno (KMU), led a roadblock at Barangay Lasang here on Monday.

Thousands gathered at the city’s Freedom Park on Roxas Street to join in the Bayan-led “Mindanao day of protest against martial law,” launched simultaneously in Mindanao’s key cites on Tuesday, said Carlo Olalo, speaking for KMU in Southern Mindanao.

“We are again calling to end martial law in Mindanao and for the ouster of President Duterte due to his crimes against the Filipino people. We, the Mindanawon, demand justice against the grave human rights violations committed by the United States-Duterte regime,” Olalo said.

“The killings, harassments, threats and intimidation may strike fear in our hearts but not today. They can try to silence us but they can never kill the dreams of our children,” he said.

The Marawi siege, which displaced more than 350,000 residents, lasted for five months, leaving the core of the city in ruins. At least 70,000 residents remain in evacuation centers and temporary shelters and have yet to return to the city.

Some 1,100 people, which the military claimed to be mostly gunmen from the Maute and Abu Sayyaf groups and their allies, died in the conflict.

On the request of the President, Congress twice extended martial law. The second extension lapses on Dec. 31. 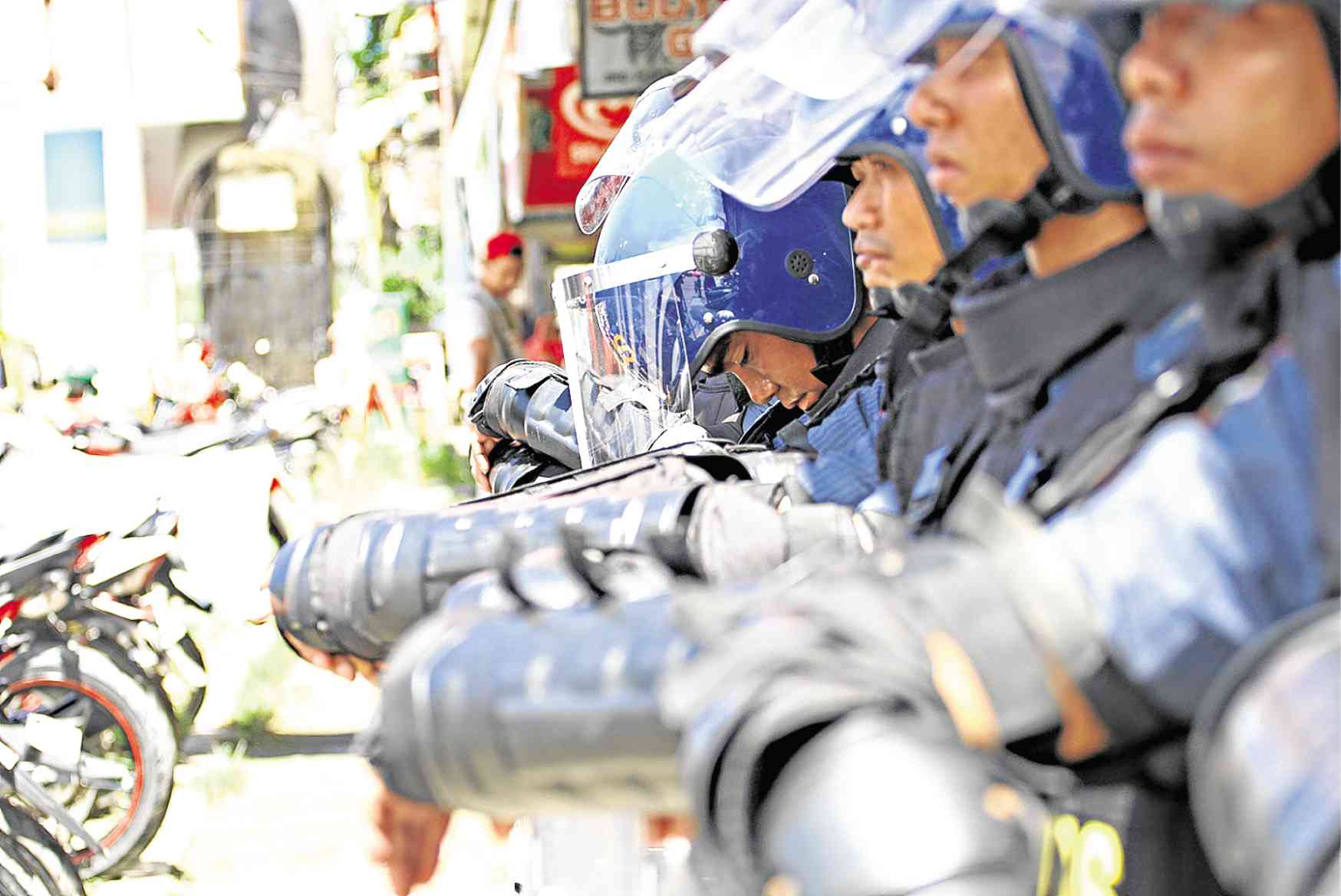 RIOT READY A group of antiriot policemen is on standby as protesters calling for the end of martial law in Mindanao march on the streets of Butuan City on Tuesday. —ERWIN MASCARIÑAS

Although the President has not requested a third extension, the Philippine National Police said it would support the move to extend martial law on the island.

On Monday, a contingent of banana plantation workers and farmers, led by KMU, blocked the road leading to Barangay Lasang, after the Task Force Davao barred them from entering the city.

Olalo said close to 500 people onboard six buses from Compostela Valley province were flagged down by the task force at a checkpoint in Lasang.

They were set to appear before the Department of Labor and Employment’s office for a dialogue but task force members stopped them from proceeding to the city, he said.

The group, instead, blocked the road leading to Davao, prompting an angry reaction from Mayor Duterte.

“Do not support party-list groups under the Makabayan bloc — these are Bayan Muna, Alliance of Concerned Teachers, or ACT Teachers, Anakpawis, Gabriela, Kabataang Makabayan, and Migrante,” she said in a statement on Tuesday.

“In the 2019 elections, please be reminded of what happened yesterday and the previous incidents involving these militant groups,” she added.

Human rights group Karapatan said at least 700 human rights defenders and activists were slapped with trumped-up charges since the President assumed office in 2016.

It also denounced the displacement of villagers in different communities in Mindanao as government soldiers ran after terrorists.

“What our people need are affordable food, land to be tilled by our farmers and jobs,” he said. —Reports from Mart Sambalud, Bong Sarmiento, Erwin Mascariñas and Jigger Jerusalem