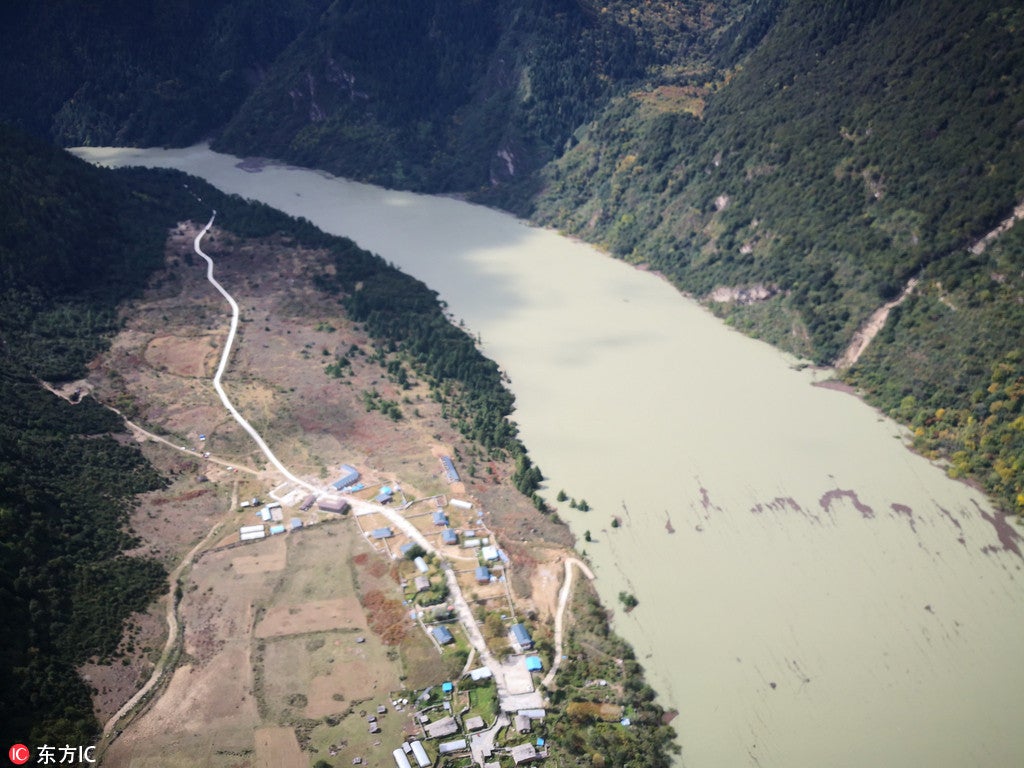 The barrier lake formed by a landslide in the Yarlung Zangbo River in Southwest China’s Tibet autonomous region on Oct 18.

BEIJING – A global warming-induced avalanche of ice and glacial debris is to blame for the recent blockage on the Yarlung Zangbo River in the Tibet autonomous region, the headwater of India’s Brahmaputra River and the longest plateau river in China, an expert said.

Around 6,000 people who live in the area of the river blockage were evacuated after Oct 17, when a landslide barricaded the deep valley through which the river flows.
The blockage created a 75-meter-deep barrier lake that held 550 million cubic meters of water at its peak, according to local emergency response bureau.

The landslide took place near Gyalha, a village in Manling county in the lower ranges of the river in Tibet, the bureau said. No casualties or injuries were reported, and China has provided hourly updates to India on the blockage.

The barrier lake’s water level had subsided by 56 meters on Saturday. It was still holding around 100 million cubic meters of water, the bureau said, but the risk of flooding had been “basically eliminated”.

Yao Tandong, a renowned glacial scientist and an academician at the Chinese Academy of Sciences, said in a news conference that the blockage was caused by an ice avalanche and moraines — unconsolidated glacial debris of soil and rock.

There are 16 glaciers above the blockage, eight of which have a high risk of collapsing and becoming avalanches, Yao said after conducting a helicopter survey of the region. Falling material from two of the eight glaciers caused the blockage, he added.

The latest ice avalanche bore similarities to the 2016 incident in Rutog county, Ngari prefecture in Tibet, Yao said. Both avalanches were due to the rising global temperature causing the glacier to melt and become unstable, he said.

Yao said that both Manling and Rutog counties are lightly populated with no major industries, so it is unlikely that local human activity would affect the glaciers.

The Qinghai-Tibetan Plateau is part of the world’s “third pole”, which holds the largest store of fresh water outside the Antarctic and Arctic. The area is the source of many of Asia’s major rivers, such as Mekong, Indus, Yangtze and the Yellow rivers, according to Chinese Academy of Sciences.
Therefore, the impact of global warming on the plateau is of intense interest to geologists and climatologists around the world.