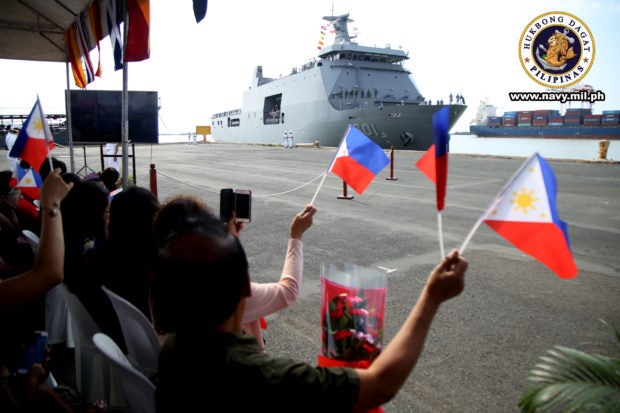 The 300-man contingent of Naval Task Force (NTF) 87 returned to Manila on Monday after spending a month at sea for the port visits in Vladivostok and Jeju Island, South Korea.

“I am proud as your Flag Officer in Command for you performing your task with excellence. You have performed your job outstandingly even if your ships suffered derangement,” Empedrad told sailors and marines in his speech at the ceremony in South Harbor.

“You have proven you can repair your ship even if you are outside the Philippine territory,” he added.

In an ambush interview with reporters, the Navy chief explained that the ship suffered problems on the lube oil pump of the starboard main engine during the 10-day voyage to Russia. The ship left Manila last September 21.

“It happened while they were on their way to Vladivostok,” he said.

“One of the engines bogged down. Mahirap gawin ‘yun if you don’t have spares. Using the logistics support with other countries, with the help of the Republic of Korea, we were able to purchase spare parts needed by our ship and they sent it to Russia,” he said.

“With the help of our friends from Russia, napabilis ang pasok sa barko and our crew were able to repair the derangement of our engines,” he added.

Capt. Florante Gagua, commander of NTF 87, said the ship could have sailed with its alternate pump but was advised by the command otherwise for safety reasons.

Due to engine issues, the Navy ship extended its five-day port visit to Russia for two days and missed the first day of the International Fleet Review in Jeju Island as a result.

“One day lang naman late and they were able to attend all the other activities in connection to the fleet review,” Empedrad said.

Aside from the BRP Tarlac, other Philippine Navy’s biggest ships joined several international engagements this year.

In March, the BRP Gregorio del Pilar (FF-15) participated in the Komodo exercises in Indonesia while BRP Davao del Sur (LD-602) and BRP Andres Bonifacio (FF-17) were sent to Rim of the Pacific in Hawaii last July.

The BRP Ramon Alcaraz (FF-16), on the other hand, was deployed to Australia last September for the Kakadu exercises.

Currently, the BRP Dagupan City (LS-551) is in Zhanjiang, China for the Asean-China maritime exercises.

Before the year ends, a Navy ship will also be sent to Japan to pick up spare parts and ammunition for the Philippine Air Force, the Navy chief said.

Asked if the Navy is pushing off the limits of its major assets, Empedrad said it is needed for the training of its personnel and he sees no issues as long as proper maintenance is conducted.

“Wala akong plano na magkaroon ng barko na nakatali sa pier. I’d like our ships to be moving away at sea for the training of personnel. We are a maritime nation kaya dapat tumatakbo ang barko lagi for training,” he said.

He said the international engagements were a manifestation that the Philippine Navy is ready to acquire more modern ships in the near future.   /kga