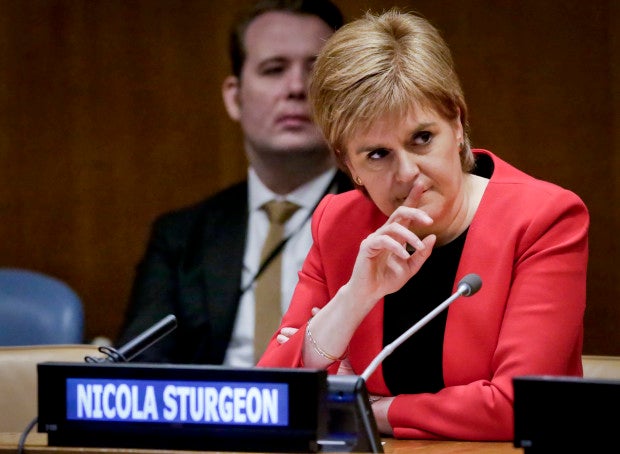 LONDON — Scotland’s First Minister Nicola Sturgeon has pulled out of an Edinburgh conference because former White House strategist Steve Bannon is scheduled to speak at the event.

In a tweet Saturday, Sturgeon said she believes “passionately in free speech” but declares she “would not be part of any process that risks legitimizing or normalizing far-right, racist views.”

Bannon is to be interviewed by a BBC journalist and answer questions at News Xchange, a media conference in Edinburgh on Nov. 14-15. BBC News is a host partner.

“The email the BBC sent to my office justifying Bannon’s inclusion described him as a ‘powerful and influential figure … promoting an anti-elite movement.’ This kind of language to describe views that many would describe as fascist does seem to me to run the risk of normalization,” Sturgeon said.

In a statement defending its decision to invite Bannon, seen Sunday on its website, Edinburgh conference organizers said Bannon is “a key influencer in the rise of populism — one of the dominant political trends of our times.”

Bannon, who played a central role in the 2016 campaign of U.S. President Donald Trump, has been making the rounds in Europe as part of his plans for a foundation, called The Movement, to boost far-right parties in Europe.

He appeared at a rally in Rome in September organized by a small far-right Italian opposition party, Brothers of Italy, where he heaped praise on Italy’s populist government. He was also in Rome for the March 4 election that brought the populists to power.