Plan to chop up Palawan assailed 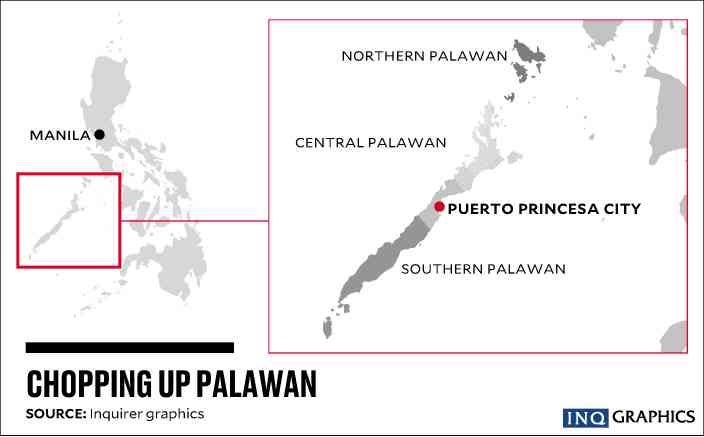 PUERTO PRINCESA CITY—Opponents of a bill that would divide Palawan into three smaller provinces warned against what they said were repercussions of chopping up the province for the “greed of a few.”

Palawan civil society groups have mounted an online campaign, #onepalawan, to attempt to block the measure in the Senate, claiming it did not go through genuine public consultations in the province.

“We were blind sided by how fast this proposal came into being,” said Cynthia Sumagaysay, one of the group’s leaders.

The bill breezed through the House of Representatives in August and was endorsed last week by Sen. Juan Edgardo “Sonny” Angara.

The bill, being pushed by the provincial government, aimed to transform the north, central and southern regions of Palawan into three provinces.

Palawan Gov. Jose Alvarez, who has been actively lobbying for the bill’s passage, said it was necessary to improve governance and spark growth in the province.

The bill is currently pending at the Senate after Angara, who chairs the Senate committee on local government, openly endorsed it in a social media post.

“Palawan is the biggest province in the Philippines, encompassing 1,800 islands and 17,000 square kilometers that can fit five Batangas provinces in terms of area,” Angara said.

He also brushed aside criticism raised by civil society groups in Palawan, defending the measure as “not motivated by partisan political concerns, nor a gerrymandering exercise,” referring to the practice of politicians to add or split up legislative districts to add a House seat or political territory, which they could dominate.

Sumagaysay said a provision of the Senate version of the bill excluded residents of vote-rich Puerto Princesa from voting in a referendum if the proposal passed Congress and was signed by the President.

Too large for governance?

“The people of Puerto Princesa will just wake up one day and realize they no longer have a province,” she said.

Palawan’s key political leaders were supporting the measure, echoing Governor Alvarez’s lament that the province was too large to be effectively governed.

“I don’t see any disadvantage if we divide Palawan into three provinces,” said Rep. Gil Acosta, of the third district. “What I see is that we will all benefit from it,” he said.

“It’s just extremely difficult to effectively provide all the services that the people deserve,” said Rep. Franz Alvarez, of the first district and nephew of the governor.

“I see its potential if things work out especially for the general services that the citizens need that they cannot avail of because they are too far,” said Yona Marionne Mahilum, a provincial capitol employee.

Sumagaysay claimed that Puerto Princesa City residents should be allowed to vote in the referendum if the bill was approved.

The bill, she said, would exclude the capital from being part of any of the proposed three provinces because it was an independent unit, being a “highly urbanized city.”

Who pays for it?

“The entire nation has to know this won’t be beneficial even to the country because the creation of provinces, the bloated bureaucracy that will result from this, and holding a plebiscite will be shouldered by taxpayer’s money,” Sumagaysay said.

“We will all bear the brunt of this unnecessary proposal, which was based on self-interests and the greed of a few,” Sumagaysay said.

Puerto Princesa City Mayor Lucilo Bayron last week said he and other city officials had been invited previously by the bill’s proponents to take part in the division campaign but opted out of it.

He said the bill would lead to the downgrading of Puerto Princesa as a component city or being chopped up into smaller towns.