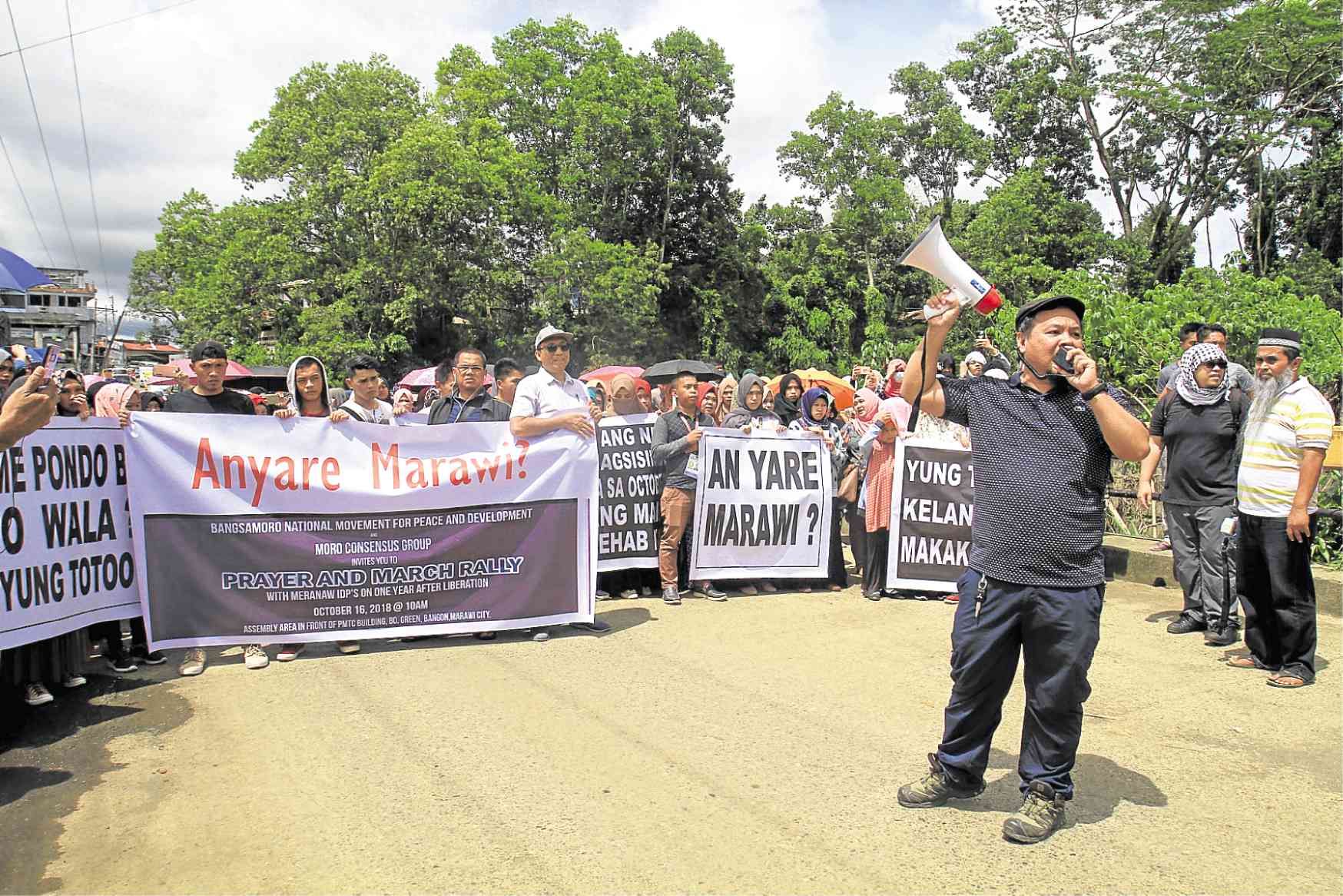 ‘WHAT HAPPENED?’ Displaced Marawi residents tried to enter their devastated city on Tuesday to mark the first anniversary of its liberation from terrorists. “Anyare (what happened)?” they asked the government, after the start of the city’s reconstruction had been postponed at least five times. —RICHEL V. UMEL

President Duterte is exasperated with the delay in the reconstruction and rehabilitation of Marawi City, presidential spokesperson Salvador Panelo said on Thursday.

It had been one year on Wednesday since President Duterte declared Marawi liberated from terrorists who had seized and held it for five months, but hundreds of thousands of residents who had been displaced by the fighting for control of the city remained in government-run shelters.

The groundbreaking rites that would mark the start of reconstruction had been postponed at last five times, sparking restiveness in the shelters.

President Duterte was “exasperated,” Panelo said, adding that the red tape had been dealt with and that a new date had been set for the groundbreaking ceremony.

Eduardo del Rosario, head of Task Force Bangon Marawi, the group charged with the reconstruction and rehabilitation of the city, said on Wednesday that the groundbreaking rites would be held on Oct. 28.

It had been scheduled for Oct. 17, the first anniversary of the retaking of Marawi from terrorists, but Duterte was not available to lead the ceremony.

“We are doubling our efforts for the preparation of the groundbreaking activity. The President’s presence is very important,” Del Rosario said.

Panelo told reporters on Thursday that the President had ordered full implementation of the rehabilitation phase of the reconstruction program.

“The groundbreaking will start at the end of the month so hopefully it will be smooth sailing from there,” Panelo said.

Fighting between government forces and local terrorists linked to the Islamic State jihadi group in Iraq and Syria reduced much of Marawi to rubble and displaced hundreds of thousands of residents of the city and surrounding areas.

The start of reconstruction was originally set for June 2018 but it was moved to July after the Chinese-led Bangon Marawi Consortium, composed of five Chinese and four Filipino companies, was disqualified due to failure to comply with the financial, technical and legal requirements.

In July, Del Rosario said the   groundbreaking would be held in the third or fourth week of August and that his group was talking with Power China, which was next in line among the private developers that had bid for the P16-billion project.

But in August, Del Rosario told reporters in Marawi that the groundbreaking had been moved to September.

September came and went but there was no groundbreaking.

Earlier this month, Del Rosario said the ceremony would be held on the first anniversary of Marawi’s liberation.

But again the plan fell through.

Hundreds of displaced residents tried to march into the city on Tuesday, the eve of the commemoration of the first anniversary of its liberation from the terrorists.

But soldiers blocked the marchers’ path as they neared a bridge from where they could have seen the ruins of their homes in the city’s commercial district.

The marchers protested, but Army Col. Romeo Brawner, deputy commander of Task Force Ranao, said the military could not allow people in because dozens of unexploded ordnance still littered the district.

But the residents had grown impatient. “Anyare?”—what happened—the marchers asked the government through their banners and placards.

“One year ago you said our Marawi was free. But we never felt the freedom,” said Drieza Abato Lininding, secretary general of the rights group Bangsamoro National Movement for Peace.

“One year ago you promised to rebuild our houses. But we still live in tents and shelters,” Lininding said.

“One year ago you said your plan was beautiful. Where is the plan?” he said. “We have many questions but up to now there are no answers.” 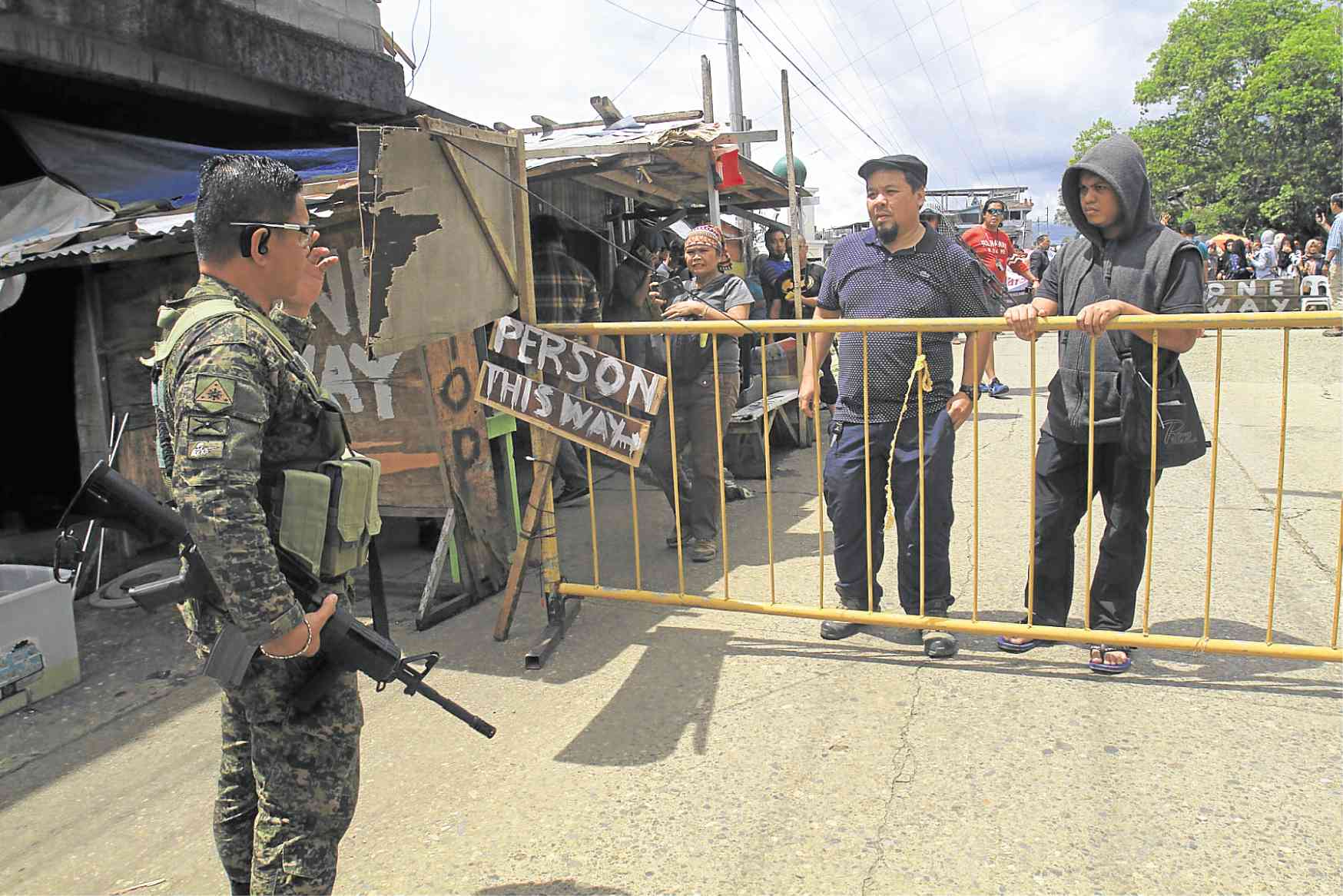 DANGER ZONE Soldiers prevent hundreds of protesters from crossing a bridge to Bangolo District in Marawi City on Tuesday, claiming there were still unexploded bombs in the area. The marchers commemorated the first anniversary of the city’s liberation from the terrorists. —RICHEL V. UMEL

Reached for comment, Del Rosario gave fresh assurance that the residents would be able to return to their homes.

He said, however, that they would have to wait longer, as the date for the start of the reconstruction had been changed again.

Soldiers were seen on Tuesday providing security to government workers surveying properties in the commercial center that would be rebuilt.

The project is expected to start with the clearing of debris in a 6-hectare area in the commercial district that had been the main battle zone.

Finmat Corp., a local company, will undertake the P75-million operation.

The clearing will be followed by the construction of schools, barangay centers, convention center, central market and parking area, and other structures.

The government expects to finish the job toward the end of 2021, less than a year before President Duterte’s term ends. —WITH REPORTS FROM JEOFFREY MAITEM AND INQUIRER RESEARCH