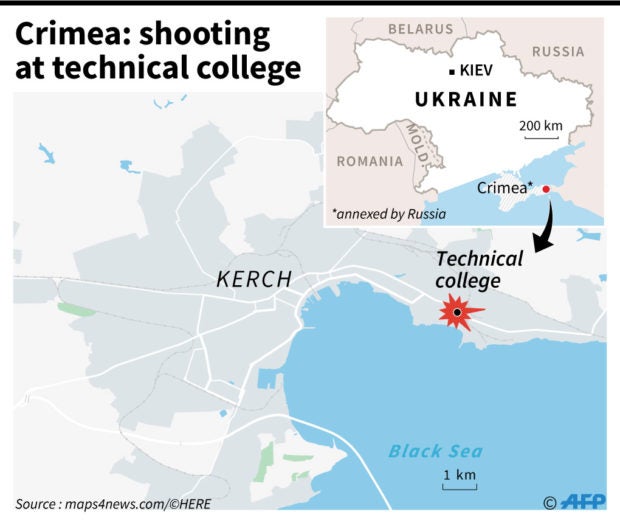 Speaking to journalists and parents of missing students in the city of Kerch, where the shooting took place, Crimean leader Sergei Aksyonov said the death toll stood at 18 plus the killer.

He added that 53 people were injured in the attack. 12 of whom were in an extremely serious condition.

Russia’s Investigative Committee named the shooter as 18-year-old Vladislav Roslyakov, a student at the college.

He was captured on security camera footage and later found dead with gunshot wounds in the college library.

Aksyonov said he had seen the body of the killer, whom he described as “not a Crimean, not even a person”, adding that Roslyakov had acted alone.

Facing a crowd of angry parents, some of whom still did not know where their children were, Aksyonov said authorities were seeking to establish the gunman’s motives: “What pushed this non-person to do this, I don’t know.”

He added that the fourth-year student had aroused no suspicion, saying teachers called him “peaceful.”

But Roslyakov confirmed earlier reports that the teenager had acquired a gun license legally. and promised a transparent investigation with “no secrets”.

Two bombs and a gun

Russian authorities initially put out conflicting versions of what happened at the technical college in Kerch, on the peninsula annexed from Ukraine in 2014.

The attack was first reported as an explosion, with authorities saying an “unidentified explosive device” had gone off and classifying the incident as an act of terror.

A few hours later the Investigative Committee said the victims were killed by gunshots.

“A shooting took place after the explosion. The gunman had a hunting gun,” Crimean official Igor Mikhailichenko said.

The attack was then reclassified as a murder case.

“This is not a terrorist act. It’s a mass killing committed by one scumbag,” Aksyonov said earlier on state television.

The Investigative Committee said most of the victims were teenagers. According to the college’s website, it accepts students in the last three grades of school, from the age of 14.

Aksyonov announced three days of mourning from Thursday for the victims of the “terrible tragedy”.

Russian President Vladimir Putin, who was in the Black Sea resort of Sochi, described the killings as a “tragic event”, during a joint news conference with visiting Egyptian President Abdel Fattah al-Sisi.

“It’s already clear that it’s a crime, the motive and possible versions for this tragedy are being carefully examined,” Putin said.

“I want to express condolences to the relatives of the dead and express the hope that the injured recover as quickly as possible,” the president added, calling for a minute’s silence to mourn the victims.

Witnesses said that the attacker fired shots but also spoke of hearing an explosion.

A student at the college who asked not to be named told AFP: “I was in a class when I heard shooting on the first floor.”

“When we all ran out into the corridor, there were others running and shouting that some guy with a machine gun was randomly shooting everyone in turn.”

“Then a strong explosion went off, but thank God, I was already outside and saw our guys being thrown out of the windows by the explosive wave,” he said, adding that part of the building collapsed.

Another witness, who gave his name as Sergei and works near the college, said in a video on the Kerch.tv website that he heard “a bang and shots.”

Sergei, whose shirt was covered in blood, said victims “were taken away in public transport, in minibuses and buses, with two or three people in each ambulance.”

“They are children and staff,” the witness said. “I saw people without legs, without arms.”

Attacks by disaffected teenagers at schools and colleges have hit the headlines recently in Russia.

In January, a school student attacked a teacher and fellow students with an axe in Siberia and tried to set fire to the school building.

In April, another student stabbed a teacher and a fellow student in the Urals Mountains and then set fire to a classroom. /cbb