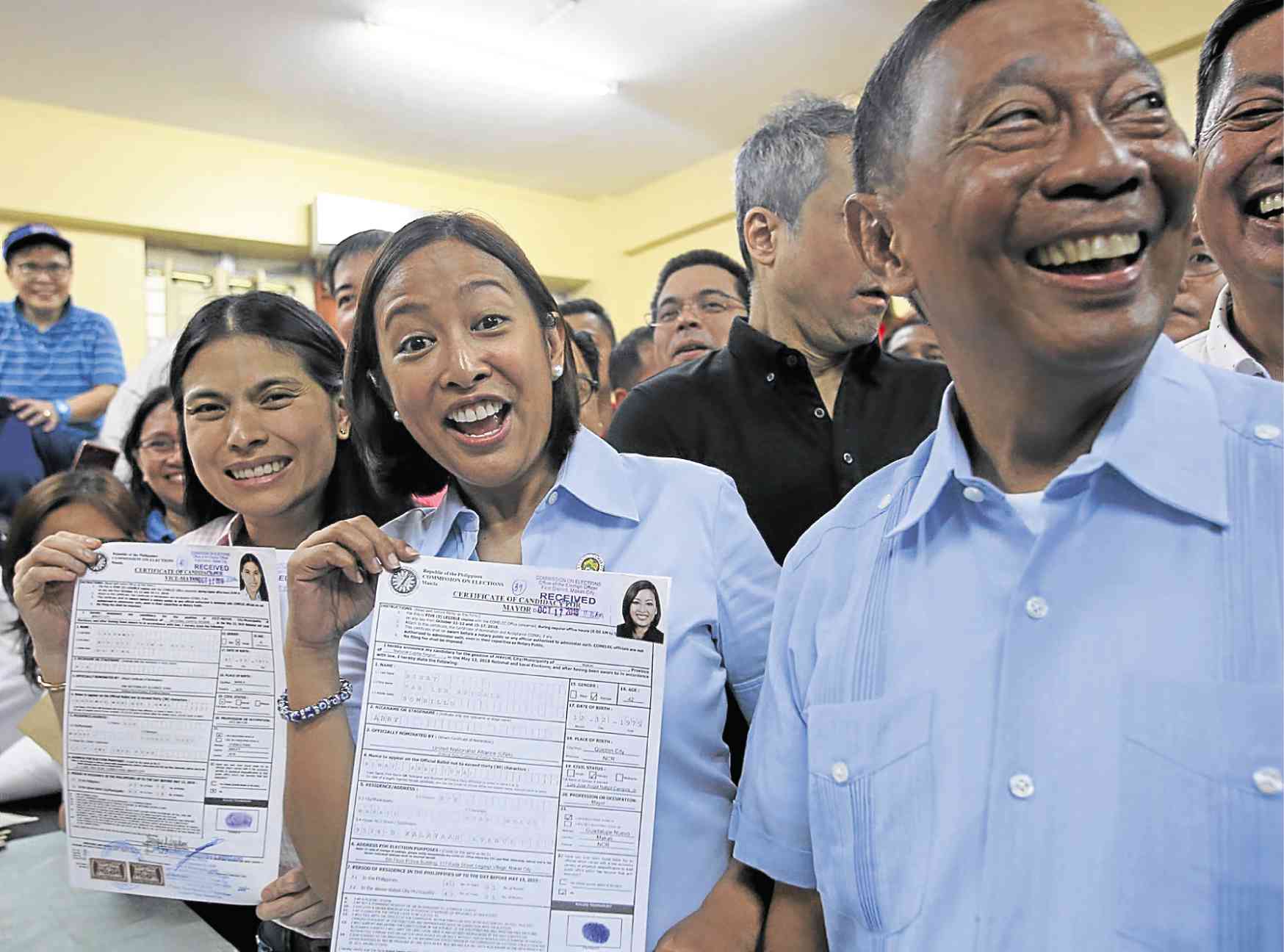 Reelectionist Makati Mayor Abby Binay not only made her political faceoff with her brother Junjun official. She also showed who’s “daddy’s girl” in the city that their family had been dominating for more than 30 years.

Former Vice President Jejomar Binay accompanied his daughter as she filed her certificate of candidacy (COC) at the local Comelec office on Wednesday, a telling gesture that “surprised” Abby since the patriarch earlier said he would refrain from endorsing either of his competing children.

Abby formally entered the race as frontrunner of the United Nationalist Alliance (UNA), the party chaired by their father, a day after younger brother Junjun filed his COC to lead  the slate of local party Una ang Makati.

After a family meeting over the weekend, Jejomar decided to let both of them run, despite Abby’s request for Junjun, whose second term as mayor was cut short by corruption charges in June 2015, to give way.

The Binay patriarch on Monday said he would leave it up to the voters to decide who between Abby and Junjun should have the next turn at the mayoralty. But when asked by reporters on Wednesday who he would be campaigning for, Binay answered: “Let’s just say that I’m supporting her.”

The elder Binay is running for congressman of Makati’s first district under UNA. Junjun’s team did not field a candidate to go against him.

Thanking her father, Abby said she was surprised that he showed up and that it was “heartwarming” to see him joining her at the COC filing.

According to an UNA official, however, a number of party members are still backing Junjun, not Abby.

“Our presence yesterday with Mayor Junjun (when he filed his COC) speaks for itself,” said JV Bautista, UNA secretary general. “Just like the councilors and barangay captains who have expressed their support for Mayor Junjun, we believe he is the best person for the job.”

Last week, 13 out of 16 members of the city council, as well as officials of 21 out of the 33 barangays, withdrew their support for Abby and instead called on Junjun to run against her in the 2019 polls. 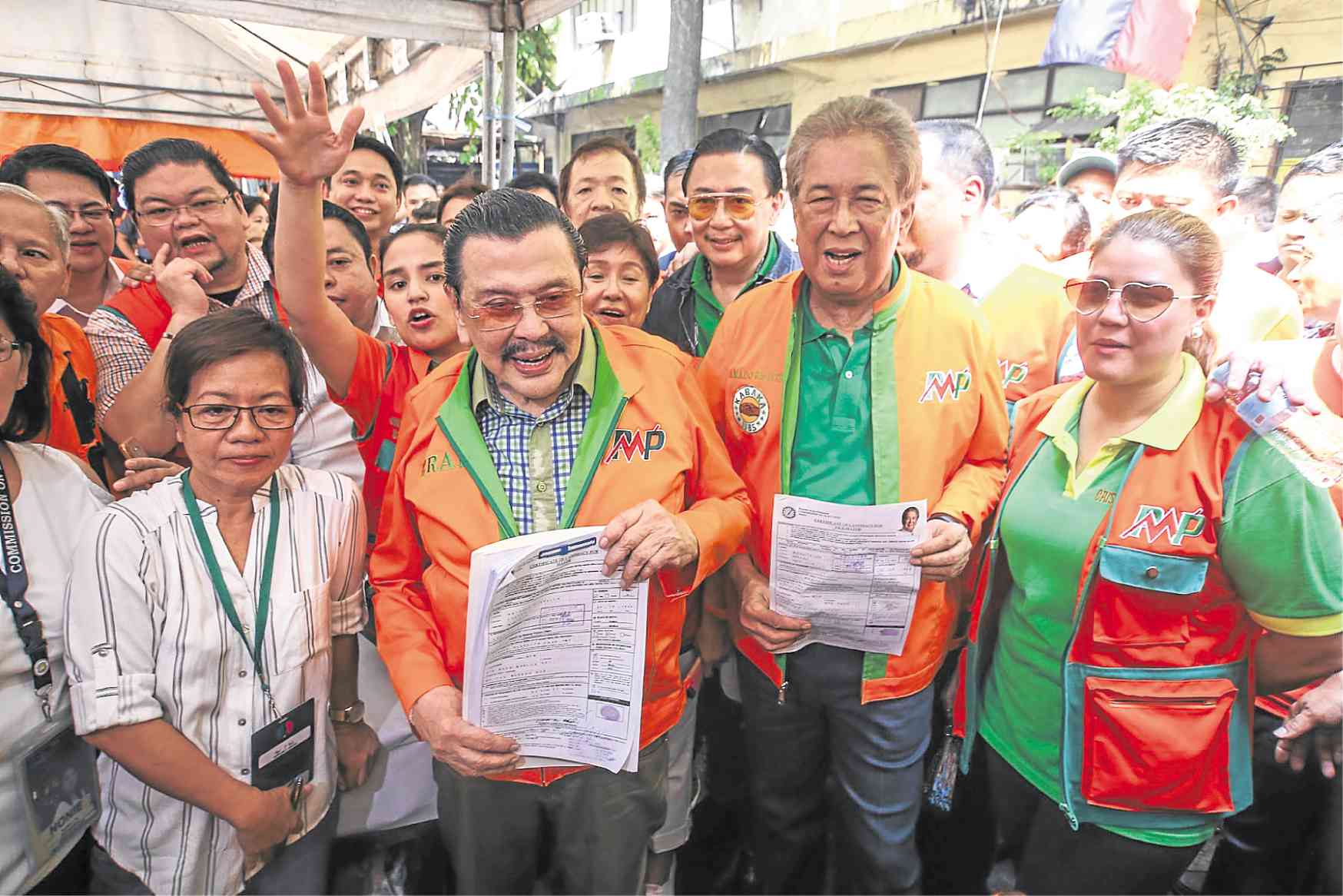 FROM RIVALS TO PALS Gunning for a third term, Manila Mayor Joseph Estrada files his COC on Wednesday with his vice mayoral candidate Amado Bagatsing, one of his opponents in the 2013 elections. —EARVIN PERIAS

Erap vs Lim vs Isko

In Manila, it’s now a three-way fight for the mayoral seat, with the incumbent Joseph Estrada and a familiar rival, former Mayor Alfredo Lim, filing their certificates of candidacy (COCs) on Wednesday.

Estrada has tapped former Rep. Amado Bagatsing, one of his opponents in the last election, as his running mate. Lim did not field a vice mayoral candidate.

Gunning for a third term, Estrada hopes to continue his winning streak against Lim, whom he defeated in the 2013 and 2016 elections. Meanwhile, just before filing his COC, Lim abandoned his longtime membership in the Liberal Party (LP) to join Partido Demokratiko Pilipino-Lakas ng Bayan (PDP-Laban), the vehicle that brought Rodrigo Duterte to the presidency in 2010.

In media statements, Moreno, indicated the general theme of his campaign: Estrada and Lim, now well into their senior years and who have governed the country’s capital city for years, should now take a “rest.”

In Pasay City, the battle for the mayoralty has also become a three-way affair, after a Manila prosecutor filed his COC on Wednesday.

Emi, who is in her third and final term as Pasay congressman, hopes to switch places with her brother, incumbent Mayor Antonino “Tony” Calixto. Chet, meanwhile, will be banking on the crowd-drawing power of his sister, show biz megastar Sharon Cuneta.

To the surprise of the Comelec personnel in Pasay, Togonon’s COC indicated he was a candidate of PDP-Laban, the party to which the Calixtos defected after leaving LP in 2017.

President Rodrigo Duterte, however, has expressed his support for Chet, who will be running under the National People’s Coalition.

A Comelec employee said they still received Togonon’s COC as part of their “ministerial duty” and that the matter would be up for review. Under election rules, if a political party nominates more than one candidate for the same position, all the nominations for the position are denied and shall be considered independents.

Togonon made headlines in June 2017 when he was suspended as Manila prosecutor by then Justice Secretary Vitaliano Aguirre II for not following his order to release three drug detainees despite the dismissal of cases against them.

He said he wanted to wrest the Speakership from Pampanga Rep. Gloria Macapagal-Arroyo.

Cayetano’s wife, Lani, seeks to join him in the House as the last-termer mayor filed her COC as congresswoman of the 2nd District.

Pia Cayetano, the incumbent 2nd District representative is running for senator. The youngest Cayetano sibling, Lino, wants to be the next mayor.