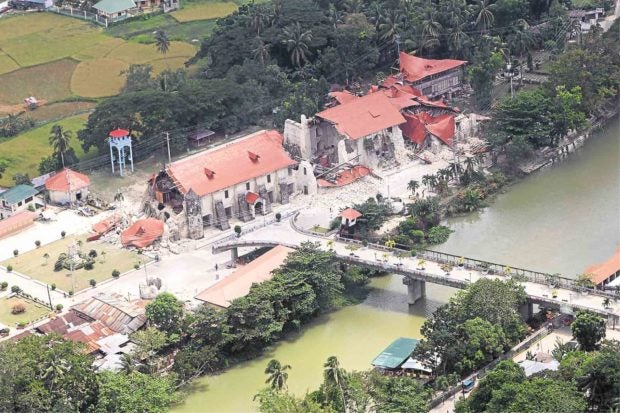 BOHOL RUINS In this photo taken in 2013, sections of Saint Peter the Apostle Parish church in Loboc town, Bohol, crumble as the province is struck by a 7.2-magnitude earthquake. Loboc’s church, the second oldest in the province, and the town’s river are major tourist attractions in Bohol. —TONEE DESPOJO / CEBU DAILY NEWS

TAGBILARAN CITY — For five years, Rodel Barace had been visiting the tombs of four family members who were among the 200 Boholanos who died in the 7.2-magnitude earthquake in 2013 that brought the province to its knees.

The pain of losing his father, Saturnino; mother, Emiliana; sister, Elizabeth; and his 5-year-old son, Shame Jyle, has eased but it remains, he said.

Barace said he missed their presence, especially when something good happened to him.

“Five years have passed but it is still tough. I still miss my family,” he said.

Barace joined at least 60 earthquake survivors in a Mass at a chapel in Barangay Obujan-Tagubaas, Antequera town, on Monday to mark the day when tragedy struck.

Homes, churches, roads and bridges around the province were either destroyed or damaged heavily by the ground shaking.

In other parts of Bohol on Monday, church bells pealed and sirens rang for 33 seconds — the duration of the 2013 earthquake — as signs of remembrance.

Bishop Emeritus Leonardo Medroso of the Diocese of Tagbilaran celebrated Mass at St. Joseph the Worker Cathedral to remember the dead and pray for earthquake survivors.

Gov. Edgar Chatto, who attended the Mass together with other provincial officials, said the earthquake tested the resilience of Boholanos and strengthened their faith.

“This day is a day of prayer and thanksgiving. We pray for the departed. This is also a thanksgiving because the earthquake brought us closer to God and [gave us the] opportunity to recover,” he said.

The path to recovery, he said, would have been more difficult if Boholanos did not help each other.

Several activities were also held in different towns on Monday as families flocked to cemeteries to pay respects to relatives who died in the quake.

But for the Somoro and Empinado families in Sagbayan town, Oct. 15 means going to the Bayong Falls at Barangay Katipunan. Like in previous years, they placed flowers and lighted candles on the spot where their children were buried during the earthquake.

The provincial government said Bohol had fully recovered from the devastation, noting that it had bounced back as one of the country’s premier tourist destinations and had shown its ability to host international meetings and conventions.