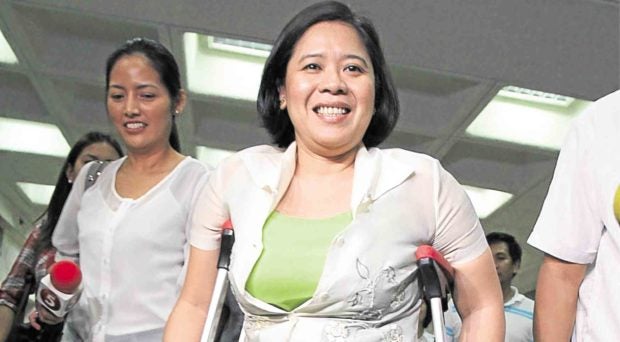 Former Isabela governor and Commission on Elections commissioner, Grace Padaca, is throwing her hat back into the political ring to run for vice governor against incumbent Gov. Faustino “Bojie” Dy III.

Dy will be the running mate of Rep. Rodolfo “Rodito” Albano III, who will run for governor against Rep. Napoleon “Pol” Dy, brother of the incumbent governor.

“After four years of being away from public service, without a government position, I cannot do much. Here is an offer to be able to do something,” Padaca said in a statement.

“For me, it has never been a desire to be on top or in power. It has and will always be what can I do to help bring about the kind of government that our people deserve. I know this is another difficult fight.”

The former broadcaster-turned-politician said she agreed to be the running mate of Representative Dy after the latter showed that he was “serious about exposing corruption and anomalies in the provincial capitol under the term of his brother.”

While she had initial concerns about running with Representative Dy, she said her sentiments changed “when they were talking about actually filing cases in court … to expose the anomalies in the capitol.”

She said she was aware that people would view her partnership with a member of the Dy political clan in an unfavorable light, but added that her battle against corruption was “more important than people’s perceptions of her.”

In 2004, she toppled the Dy political dynasty when she won as governor against Faustino Dy Jr.

As a commentator of Radyo Bombo in Cauayan City, Padaca had denounced corruption and illegal gambling and logging.

An accountant, she began an unlikely political career when she ran for a congressional seat in 2001 against the influential Dy family and lost by 48 votes.

Padaca, crippled since childhood by polio, had little money and no political base, but did well. She campaigned in crutches and went around the province on a borrowed truck.

She again challenged the Dys in 2004 and won. She was reelected as governor three years later.

In 2008, Padaca received the Ramon Magsaysay Award for government service.

In 2010, she lost a third term, by a slim margin in the country’s first automated elections, to Faustino Dy III.

Representative Dy said he was happy that Padaca had agreed to be his running mate and his “partner for change.”

“With former Governor Padaca on our side, we are now even more hopeful that we can be successful in our campaign to rid Isabela of corruption and to address the anomalies under the current provincial administration,” he said.