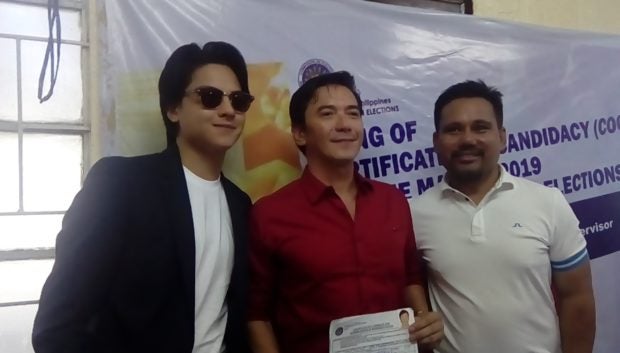 Actor Daniel Padilla accompanied his father, Rommel Padilla, in filing his certificate candidacy for congressman on  Oct. 16, 2018 at the Comelec office in Cabanatuan City. PHOTO by Armand Galang/Inquirer Central Luzon

CABANATUAN CITY — Teenage actor Daniel Padilla attracted attention at the Commission on Election  (Comelec) office here on Tuesday when he accompanied his father, Board Member Rommel Padilla, in filing his certificate of his candidacy for congressman.

Padilla tried to keep a low-profile, but he later accommodated requests to pose for photographs from  people, including policemen guarding the Comelec office.

His father, an independent candidate, is challenging reelectionist First District Rep. Estrellita Suansing, who is a candidate of the ruling party PDP Laban. Both of them, however, are supporters of President Rodrigo Duterte.

Padilla was not the only celebrity in the Ecija polls. Film director and former San Antonio town Vice Mayor Kaka Balagtas filed his COC for board member in the fourth district. /ee