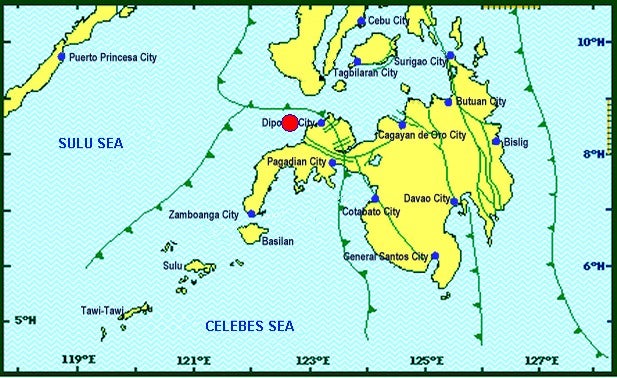 A red dot marks the epicenter of the magnitude 5.0 earthquake that hit Zamboanga del Norte on Tuesday, Oct. 18, 2018. PHIVOLCS IMAGE

A magnitude 5.1 earthquake was recorded off Zamboanga del Norte on Tuesday, the Philippine Institute of Volcanology and Seismology (Phivolcs) said.

The Phivolcs revised the earlier 5.0-magnitude quake to 5.1-magnitude.

It was felt at Intensity III in Manukan, Zamboanga del Norte, and in Dipolog City

The tremor had an instrumental intensity of II in Dipolog City while it was recorded at Instrumental Intensity I in Sibulan, Negros Oriental, and in Cebu City, Phivolcs said.

The earthquake of tectonic origin had a depth of 19 km.

Phivolcs said no aftershocks or damage was expected from the temblor. /cbb