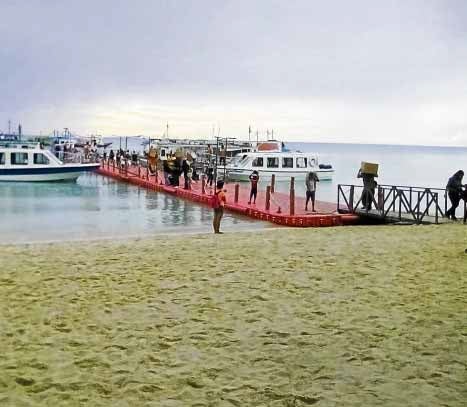 ENTRY POINT Tourists going to Boracay arrive at Boat Station 3, the only entry point to the resort island, as the government begins a 10-day “dry run” on Monday following a six-month closure due to environmental concerns and ongoing road and sewage projects. —ETO PAGADUAN

The government on Monday declared the waters off Boracay Island “safe for swimming” as it started a 10-day “dry run” for the reopening of the resort island to tourists.

Boracay returns to business on Oct. 26, ending a six-month shutdown for a general cleanup ordered by President Rodrigo Duterte, who found the island had become a “cesspool” after decades of unhindered tourism and overdevelopment.

About 1,000 islanders, workers and residents of mainland Aklan province stomped on Boracay’s powdery white sand beach and frolicked in the sea on Monday as Environment Secretary Roy Cimatu led the countdown to the reopening.

Cimatu is head of the government task force that oversaw the cleanup.

“I will declare now that the waters of Boracay are now safe for swimming. This day will mark the rebirth of Boracay Island after undergoing massive recovery efforts,” he said, citing the lowered coliform levels in the water as found by government studies.

A highlight of the dry run was a “salubungan,” staged by visitors on the stretch of beach at Barangay Balabag in time for the celebration of Aklan Day.

Officials said the dry run was intended to allow the government to assess the impact of measures it had taken to rehabilitate the island, including widened and paved roads and sidewalks, improved sewage systems, as well as visitor traffic control.

Part of the activities was the unveiling of “Dramatic Road” at Barangay Bulabog, so-named, Cimatu said, because of all the drama that followed after the government took over an old, occupied alley, cleared it of structures and rebuilt it as a road.

“Many had to sacrifice, while others faced closure of their establishments and demolition of their structures,” he said, adding that the closure of Boracay was the beginning of continuing government efforts to rehabilitate the island.

Cimatu said the government would strictly monitor visitor traffic to the island to make sure the number did not exceed the declared daily carrying capacity of 19,000.

He said excluded visitors would have to wait for their turn and prospective visitors would be monitored through room reservations at hotels on the island accredited by the Department of Tourism.

Environmental groups, however, criticized the decision to shut down Boracay, saying the government had been blind to the plight of 36,000 workers who had been displaced by the “unplanned closure” of the island.

“We think all the fanfare and selective photo releases of Boracay’s beaches are belied by the fact that only less than 10 percent of the island’s 2,300 establishments have complied with regulations after the six-month arbitrary lockdown,” said Leon Dulce, national coordinator of Kalikasan People’s Network for the Environment.

The Department of Environment and Natural Resources (DENR) has parried speculation that the rehabilitation is part of efforts to replace small enterprises on the island with big companies.

Part of the cleanup will be the installation of yellow trash bins donated by an airline company.

Also unveiled on Monday were two park development projects to be comanaged by the DENR with San Miguel Corp. and Aboitiz Foundation.

Free hotdog sandwiches were given to Monday’s visitors, donated by a leading hotdog manufacturer.

Cimatu’s task force also entered into an agreement with a private diving school for the assessment of the marine biodiversity off the island. —Melvin Gascon