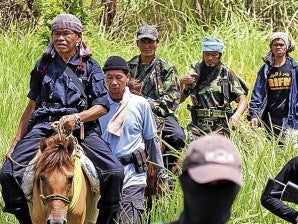 DEAD OR ALIVE? Ameril Umra Kato, leader of the Bangsamoro Islamic Freedom Movement, arrives on horseback along with his fighters at their camp in Maguindanao in this file photo. JOEFFREY MAITEM/ INQUIRER MINDANAO

“The appointment of temporary leaders is not a logical arrangement if he is alive,” Jaafar said, citing “reliable information” that Kato was dead.

Jaafar claimed that on Thursday, BIFM members marked the seventh day of Kato’s death with prayer and offerings at Camp Omar in Talayan, Maguindanao. Two cows were slaughtered for the gathering.

Jaafar said Kato’s top lieutenants did not confirm the demise of the 65-year-old Saudi-trained cleric but told the crowd on Thursday that their leader “went somewhere, that he was not available for conversation but was well.”

Jaafar said these words meant that Kato had gone “to another life; could not be talked to because he is already dead; and is in good condition because as a Muslim, he is now in Paradise.”

Jaafar said one of Kato’s wives said she was no longer able to talk to her husband.

“The information is very reliable. He is dead,” Jaafar said.

But Jaafar could not say when and where exactly the BIMF leader died.

But Abu Misri Mama, spokesperson of the Bangsamoro Islamic Freedom Fighters, the BIFM’s armed wing, said that if Kato was indeed dead, they would have made an announcement early on.

“We would have made it public already. There is no need for us to hide it. As Muslims, it is our obligation to make the demise of a good brother known so his loved ones could pay their last respects,” Misri said.

He branded Jaafar’s claim as “amazing and false.”

“Announcing that a living person has died is a sin,” he said.

Pressed about the condition of the BIFM founder, Misri said Kato had indeed suffered a stroke. Earlier, he said Kato had had an asthma attack.

“Don’t worry. If he dies, we will be the ones who will announce it,” Mama said.

“I do not know why Jaafar is spreading the news that Ustadz Kato is dead,” Mama said. “He is alive and recovering in an undisclosed place in Mindanao.”

He also resented his being left out of a list of rebel leaders and camps guaranteed protection from arrest or attack under a ceasefire agreement with the government. Kato said this rendered him vulnerable to attack by government forces.

Kato was being hunted by government forces for allegedly leading   attacks in North Cotabato in 2008 in which dozens of people were killed and thousands of others displaced.

The attacks came as the government dilly-dallied on the signing of a Memorandum of Agreement on Ancestral Domain, which the Supreme Court subsequently struck down as unconstitutional.