Senator Grace Poe has filed her certificate of candidacy (COC) at the Commission on Elections (Comelec) headquarters, as she seeks another term in the Senate in 2019.

Poe was accompanied by her mother, veteran actress Susan Roces, when she filed her COC on Monday.

“Kami ay nananalangin ng aking ina na patuloy ang suporta ng ating taumbayan (My mom and I are praying that the public will continue their support),” she said in a press briefing after submitting her COC to the Comelec.

Poe, who topped the senatorial polls in 2013, said she wants to “offer” herself again in seeking another term at the Senate.

“Inaalay ko muli ang aking sarili. Kung ako ay pagkakatiwalaan muli, ito ay isang karangalan at pribilehiyo (I am offering myself again. If they put their trust in me for the second time, it will be an honor and privilege),” she said. 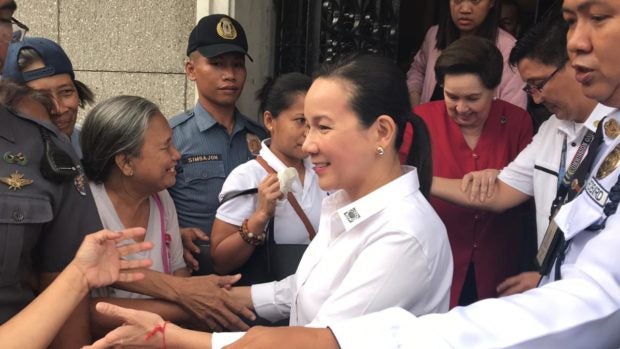 In filing her COC, Poe also hit the Department of Transportation’s proposed modernization of jeepneys.

While she said she is not against modernization, Poe said the government should consider the welfare of jeepney drivers, who she said might find it hard to comply with the requirements of the proposal.

She said she will also push for the passage of the rice tarrification bill, which seeks to lift restrictions or quota on rice importations.

Poe said she will run as independent in the upcoming elections. /je