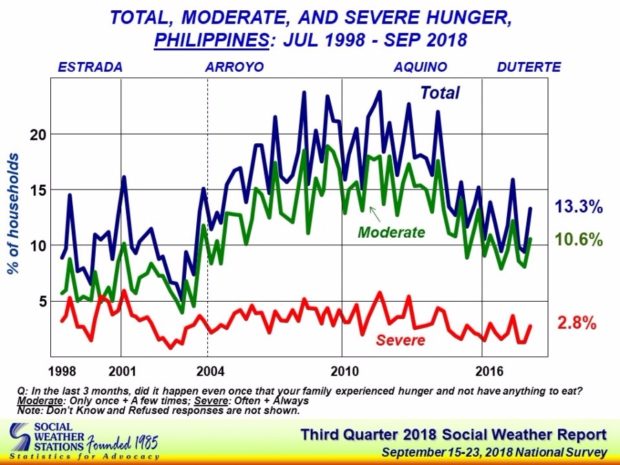 “The measure of Hunger refers to involuntary suffering because the respondents answer a survey question that specifies hunger due to lack of food to eat,” the SWS report explained.

In Visayas, on the other hand, Filipino families who experienced involuntary hunger in the third quarter was at 6 percent (269,000 families), 3.3 percentage points lower than the 9.3 percent (419,000 families) who said they suffered from hunger in April to June 2018.

Moreover, the SWS said hunger rate increased among the “Self-rated poor” with 18.5 percent in the September survey — 5.9 percentage points higher than the June survey which was at 12.6 percent.

The latest SWS survey further noted that hunger increased by 1.1 percentage point among non-poor from 6.5 percent in the second quarter to 7.6 percent in the third quarter.

The SWS 3rd quarter 2018 survey on hunger interviewed 1,500 adults with 600 in Balance Luzon and 300 each in Metro Manila, Visayas, and Mindanao.

The survey’s margin of error were ±3% for national percentages, ±4% for Balance Luzon, and ±6% each for Metro Manila, Visayas, and Mindanao. /kga