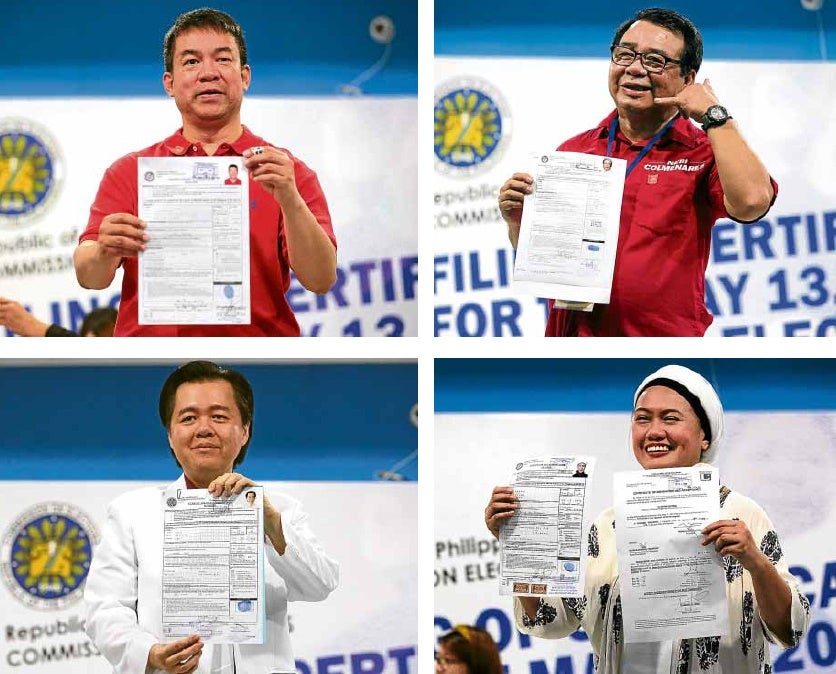 SENATE ASPIRANTS Senatorial aspirants who came early to file their certificates of candidacy at the head office of the Commission on Elections in Manila on Thursday include (top, clockwise) reelectionist Sen. Aquilino “Koko” Pimentel III of Partido Demokratiko Pilipino-Lakas ng Bayan, former Rep. Neri Colmenares of Bayan Muna and the Makabayan bloc, civic leader Samira Gutoc of the Liberal Party, and Dr. Willy Ong of the Lakas-CMD. —PHOTOS BY GRIG MONTEGRANDE

Sen. Aquilino “Koko” Pimentel III was the first candidate to file his certificate of candidacy (COC) on Thursday as he said he wanted to be done with it so he could focus on preparations for his Oct. 18 wedding to fiancée Anna Kathryna Yu.

The senator, who came in red, urged members of the ruling Partido Demokratiko Pilipino-Lakas ng Bayan (PDP-Laban) to wear the color when they file their COCs until Wednesday next week, as this signified the party’s openness to “out-of-the-box solutions to our problems.”

But Aguilar was not on the list of six senatorial candidates of PDP-Laban disclosed by Pimentel.

Twelve seats in the Senate are at stake in the May 2019 midterm elections.

Those who have higher chances of winning are seven sitting senators seeking reelection and six others who want to regain their seats, according to Earl Parreño of the Institute for Political and Electoral Reforms.

“I still doubt whether Mr. Duterte’s closest allies will make it because elections in the Philippines are personality-based and the incumbents … have an edge over the newbies,” Parreño said.

Drawing from the success of President Duterte’s 2016 campaign, new and returning senatorial candidates are banking on their social media following to carry them to victory.

Former Bayan Muna Rep. Neri Colmenares, the official candidate of the Makabayan bloc, claimed on Thursday that because the group had the “strongest social media force,” he just may win in his second  try for the Senate.

He added that it also helped that he was running on a platform that aims to deal with issues hounding ordinary Filipinos, such as contractualization, low wages and the high cost of basic commodities.

“I recognize [that our bloc] has not enough funds. I did not come from a rich, influential family. But we have the strongest social media force that if we are able to shape our countrymen to campaign for me, that may be one way for me to win the election,” Colmenares said. 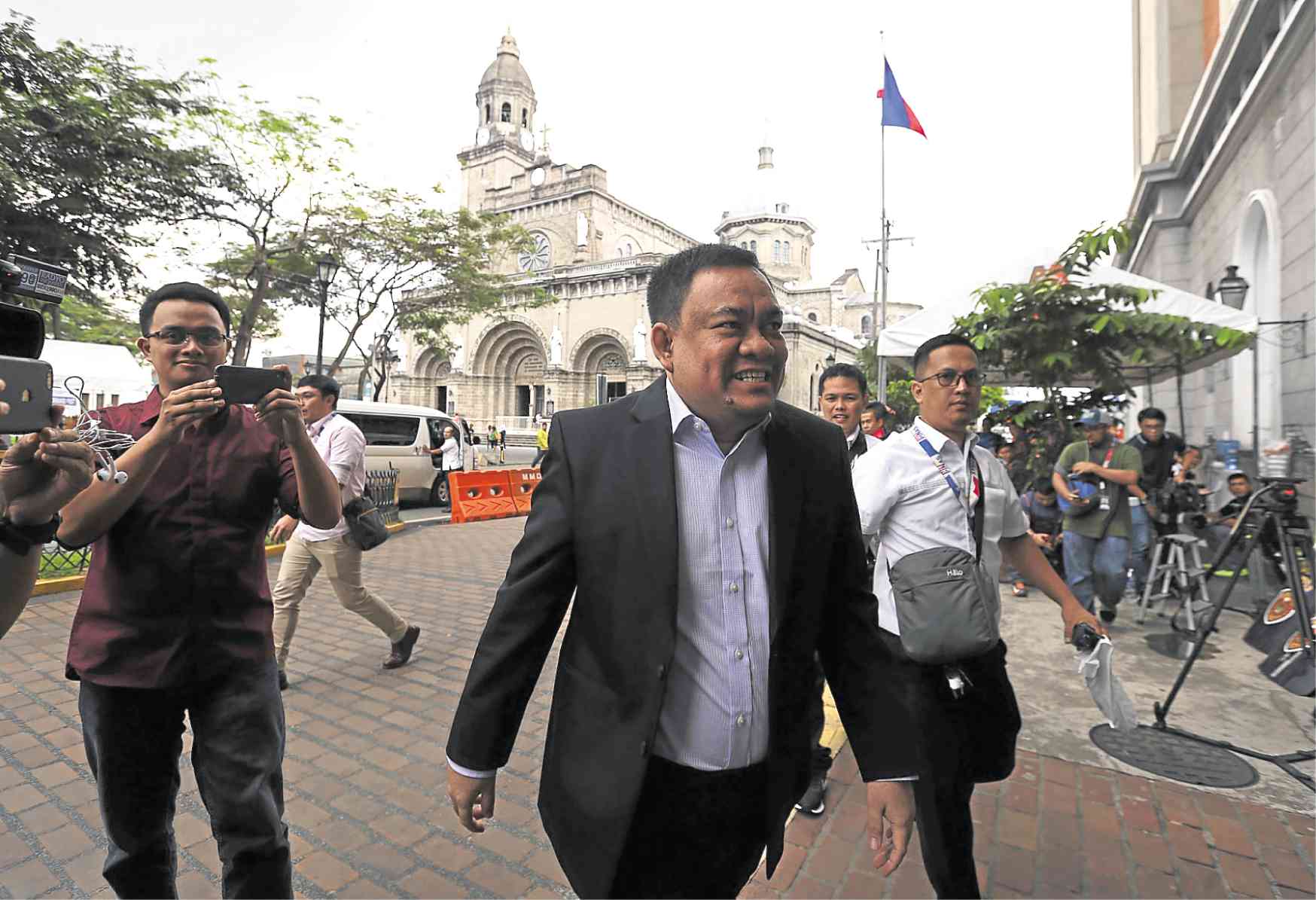 FIRST DAY OF REGISTRATION Commission on Elections Chair Sheriff Abas arrives at the Comelec office to supervise the first day of the filing of certificates of candidacy on Thursday. —LYN RILLON

Liberal Party candidate Samira Gutoc also believed that apart from her voting base of around 3 million in Mindanao, “social media is the way” for her to snatch one of the 12 Senate seats up for grabs in the May polls.

Though appointed by Duterte to the Bangsamoro Transition Commission, Gutoc opted to run under the opposition ticket as she said that now was the “best time” for the public to hear Marawi’s issues, as well as to have someone able to speak out on the killings and violence in the country.

In filing his COC, Willie Ong of Lakas-Christian Muslim Democrats expressed confidence he’d be the first doctor in over a decade to become senator through “God’s will” and the help of his supposed 10 million followers on social media.

“He (God) will not put me here to embarrass myself,” said Ong, who promised to advocate for better healthcare policies such as cheaper medicines, free medical operations and laboratory tests.

For reelectionist Sen. JV Ejercito, the Estrada name has not only recall power but also healing power.

Ejercito said he planned to use “JV Estrada” as his nickname on the COC that he would file next week.

Ejercito said he would till use Joseph Victor Ejercito as his official name on the COC but would include a nickname, the same thing he did when he first ran for senator in 2013.

His half-brother, former Sen. Jinggoy Estrada, is also expected to run in the 2019 senatorial race.

Jinggoy Estrada is rating well in opinion polls, unlike Ejercito whose name was no longer in the Magic 12 in the Senate race in the latest polls.

Read Next
‘King,’ ‘rock star,’ wannabes join Senate race
EDITORS' PICK
Smart releases Hyun Bin’s second TVC
Current dominant strain of COVID-19 more infectious than original—study
Water remains our saving grace right now
DOLE: Return of OFWs’ remains from Saudi to be ‘delayed,’ deadline moved to ‘early next week’
‘Justice will be done,’ Duterte assures as he vowed probe on Jolo incident to bare ‘truth’
EuroMillions Superdraw: A lottery draw unlike any other is coming to the Philippines
MOST READ
Duterte tells military: No other president looked at you the way I did
BREAKING: Duterte signs anti-terror bill into law
Locsin warns of ‘severest response’ if China’s army drills in SCS ‘spill over’ to PH domain
Vico: Cleanup of bidding process saved Pasig gov’t P415M
Don't miss out on the latest news and information.