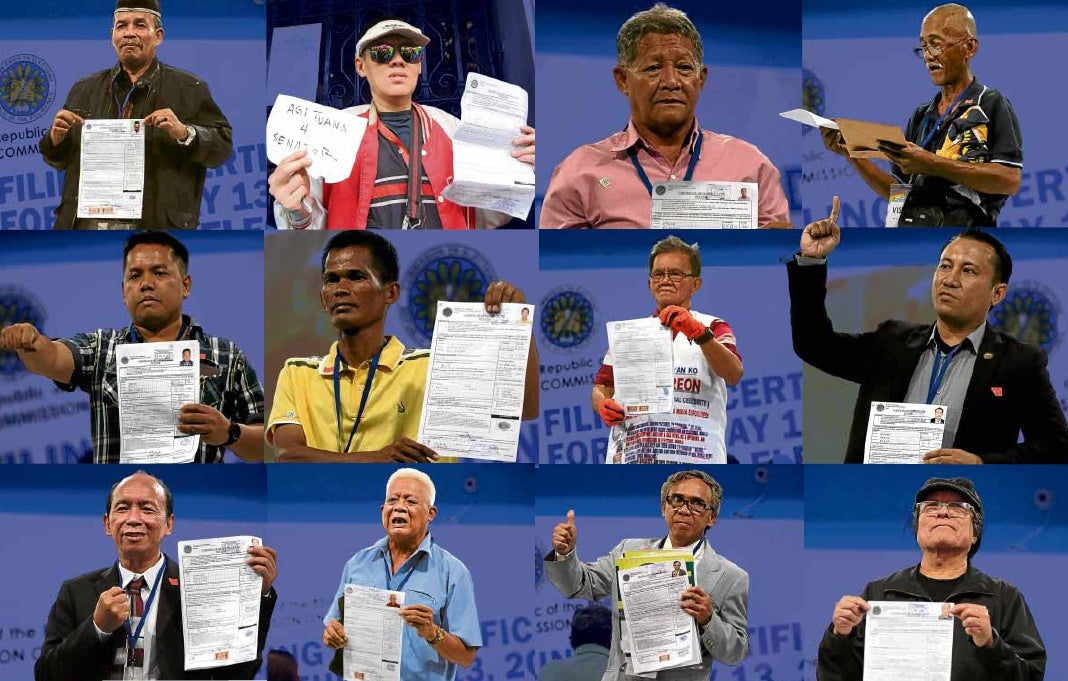 A “king,” a supposed ex-beau of a former presidential communications official, a self-proclaimed husband of Kris Aquino and an advocate of “hao-siao,” or bogus journalists.

Dozens of senatorial aspirants trooped to the head office of the Commission on Elections (Comelec) in Intramuros, Manila, on Thursday to make their case that they should be elected to the 18th Congress in next year’s midterm elections.

Noisy, banner-waving supporters cheered for them.

In an impassioned speech at the start of the five-day filing of certificates of candidacy (COCs), “King Salam” Emilio Delfin Lacan Luisong Tagean said it was time the Philippines had its own version of astronauts and cosmonauts, and he wanted them to be called “kinunot.”

Not to be mistaken for the popular Bicolano dish though, Tagean’s kinunot stands for “kingdom with new organization nationwide unite the technology.”

“If we have advance technology, no country would meddle with us,” said the 50-year-old resident of Naga City.

Saying the rights of hao-siao journalists should be protected, Bulacan resident Christian Castro said that should he become a senator, he would work toward ensuring they would be taken care of and provided with such benefits as free housing.

The “publisher-editor” said he felt for these people because they were not lucky enough to be accepted by real news organizations.

The most interesting candidate who filed a COC on Thursday may have been 39-year-old Anson Tuana.

In his rambling speech, he claimed to have the support of Chinese President Xi Jinping, who supposedly provided him with clothes and bodyguards.

He also claimed he and Uson had a one-night stand.

His hair graying and wearing a coat and tie, Magtira looked more like a preacher than a rock star. The Comelec declared him a “nuisance” candidate in 2016.

Masseur George Flores, 55, stopped by the Comelec office as reporters swarmed around Tuana.

“You’re stupid if you voted for people like that,” Flores said loudly.

Only the “crazies,” like Tuana, have the gall to run knowing they don’t have the machinery, Flores said.

For him, only lawyers should be allowed to run for the Senate.

“Even actors and actresses should not be allowed to run for Senate,” he said. “Why? Because senators are supposed to craft laws.”

In every election cycle, the Comelec never fails to deal with a host of characters trying to get themselves on the ballot.

In the general elections in 2016, 90 of the 140 senatorial aspirants were deemed nuisance by the poll body.

Comelec Commissioner Rowena Guanzon said on Thursday that while the poll body respected everyone’s political right, it hoped that those who “do not have the bona fide intention to run and launch a true campaign” would think twice against filing their COCs.

There is no explicit provision in the Constitution against nuisance candidates.

The only limitation that the framers set across all positions is that candidates seeking any government post should be natural-born Filipinos who can read and write.

In determining whether an aspirant is a nuisance candidate, the existence of funds to mount a campaign isn’t the only measure, according to  Guanzon.

If aspirants do not have the “social and political capacity to campaign,” such as a nationwide organization or an advocacy to rally behind, it is likely that they could be declared nuisance candidates, the Comelec official said.

Comelec spokesperson James Jimenez added that other factors that could make one be deemed a nuisance—if one’s candidacy was seen to put the electoral process in disrepute and if one’s name was designed to cause confusion among voters.