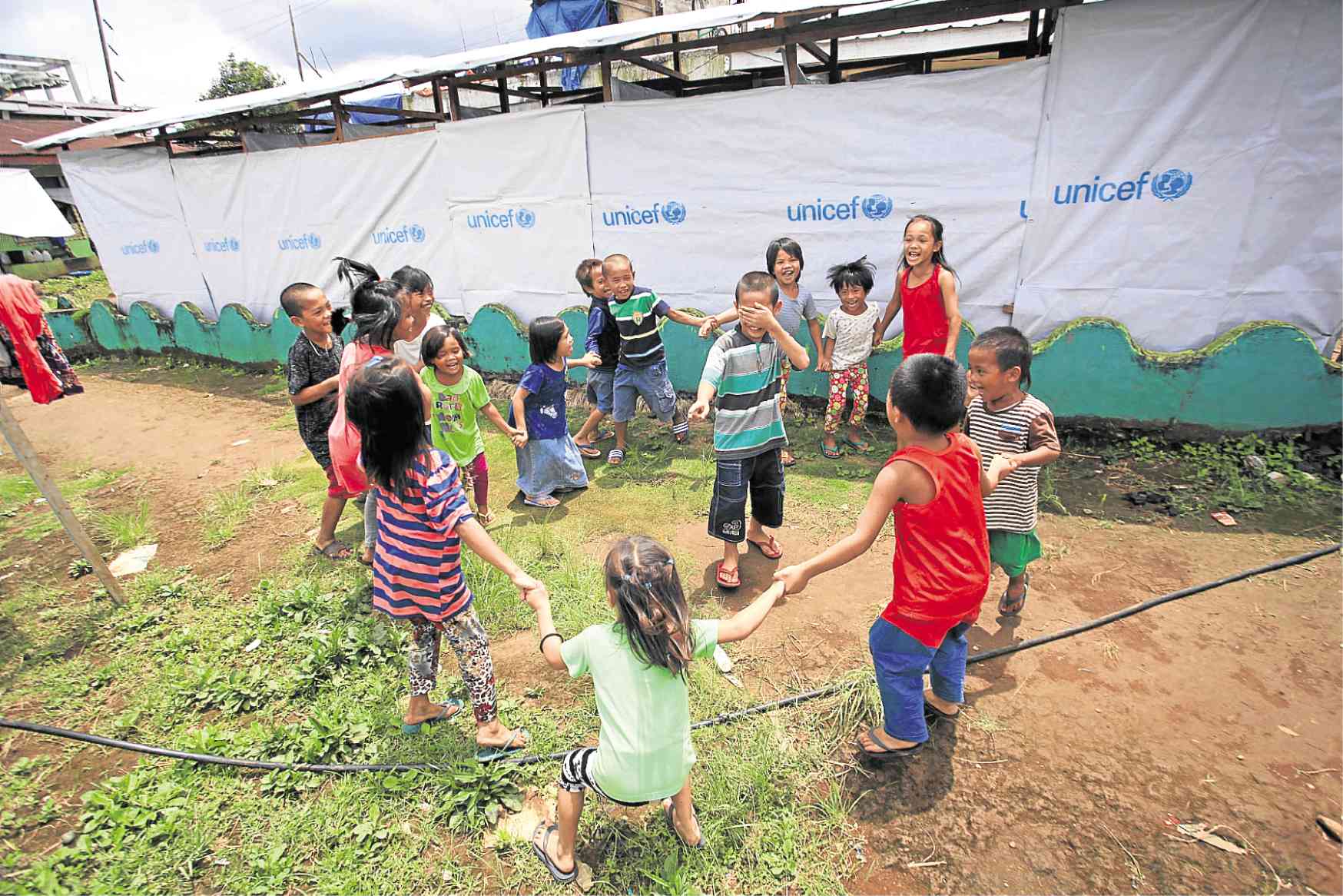 DISPLACED Children of Marawi play at an evacuation site for residents displaced by the war in the predominantly Muslim city. —RICHEL UMEL

COTABATO CITY — At least 100,000 children have not returned to school in Marawi City nearly a year after the government took back parts of the predominantly Muslim city from local terror groups trying to set up an Islamic State (IS) base there, according to a UN report.

Mark Bidder, head of the UN Office for Coordination of Humanitarian Affairs, said in the report obtained by reporters on Thursday that only 21,000 students enrolled this year in public elementary and secondary schools in Marawi City and areas in the provinces of Lanao del Sur and Lanao del Norte that had been drawn into the war, too.

“Displaced learners are scattered throughout municipalities in Lanao del Sur and Lanao del Norte,” he said in the report.

In Marawi, Bidder said at least 20 out of 69 public schools were destroyed during the five-month war between soldiers and IS-aligned members of Maute and Abu Sayyaf that reduced the core of the city to rubble.

Rehabilitation work on ground zero, which hosts residential and commercial establishments, has yet to begin.

President Duterte, who declared martial law in Mindanao to deal with the Marawi crisis on May 23 last year, had declared the city liberated from IS on Oct. 17, 2017.

A report from the Task Force Bangon Marawi showed that at least 14,000 public school children enrolled in Marawi City alone this year.

In July, a month after the opening of primary and secondary public schools nationwide, the Department of Education in the Autonomous Region in Muslim Mindanao (ARMM) launched the “Back to School and Stay in School Initiative” for children displaced by the Marawi war.

The initiative, which also covered 18 towns in the two Lanao provinces, sought to help at least 125,000 school children who lost homes and had been driven out of Marawi by the war.

This was part of the ARMM government’s response to the needs of individuals displaced or rendered jobless by the war, according to Rasol Mitmug Jr., education secretary in the ARMM.

In the UN report, Bidder said Lanao del Sur, even before the Marawi war, was already among the Philippines’ poorest provinces where 66 percent of families lived on less than $1 a day.

Marawi is the capital of Lanao del Sur.

As of Sept. 2, of the more than 350,000 civilians uprooted by the Marawi war, 69,452 remained displaced, according to government data.