It was the first day of the filing of certificates of candidacy (COCs) Thursday and political veterans, newbies and other wannabes — including the serious and seemingly not so serious — trooped to Commission on Elections (Comelec) offices.

Among them, a man, who claims to be a former boyfriend of Mocha Uson, wants to run for senator in the 2019 elections purportedly on the urging of President Rodrigo Duterte.

Anson Tuana, from San Juan City, was at the Commission on Elections headquarters in Intramuros, Manila, on Thursday morning. He said he would be filing his certificate of candidacy to run for the Senate.

He said his agenda included the lowering of diesel prices.

(That’s the order of President Duterte, our commander in chief. I was also a boyfriend of Mocha.) 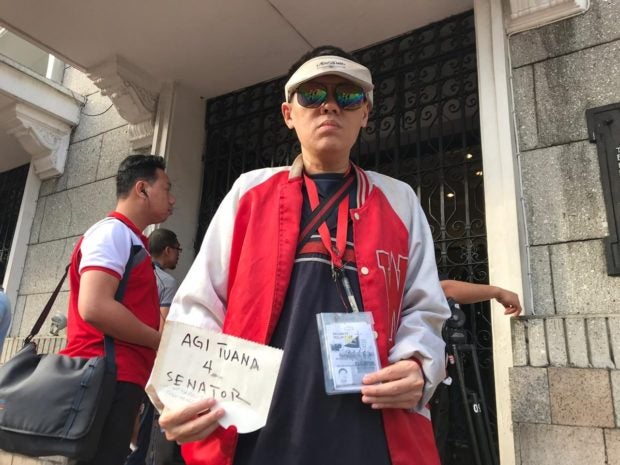 Angon Tuana, who claims to be a former boyfriend of Mocha Uson, stands outside the Comelec office in Intramuros, Manila, on Thursday, Oct. 11, 2018, waiting for his turn to file his COC for senator. INQUIRER.NET / CHRISTIA MARIE RAMOS

Aside from the lowering the diesel prices, Tuana also aims to lower the prices of rice and electricity.

According to Tuana, he also acted as a security officer when Pope John Paul II visited the country during the time of President Fidel Ramos.

(I was a security volunteer during the World Youth Day. President Ramos sent me.) /cbb