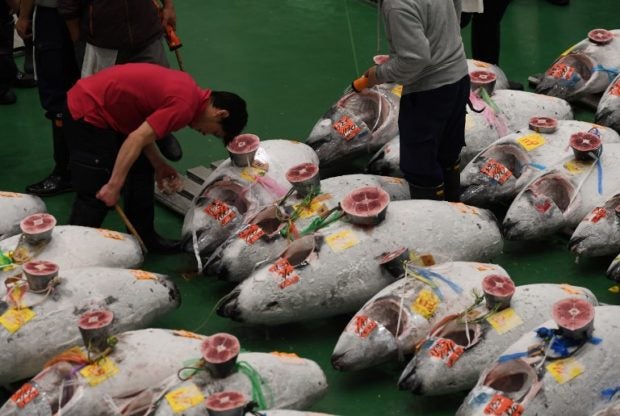 Buyers, workers and auctioneers attend the first tuna auction at the new Toyosu fish market, which replaced the world-famous Tsukiji market. The market opened for its first day of operation in Tokyo on October 11, 2018. AFP

TOKYO, Japan — The cries of the raucous pre-dawn tuna auction rang out for the first time at Tokyo’s new fish market Thursday, just days after the world-famous Tsukiji market closed the door on an 83-year history.

The location may have changed but the ritual remained the same: huge frozen whole tuna laid out on the ground, bells tolling to sound the start of the auction and a loud and bewildering system of bidding understood only by those taking part.

“There we go. We’re off,” said Kiyoshi Kimura, one of the celebrities of the sushi world, who owns the Zanmai Sushi chain and has previously paid record prices for tuna at New Year auctions.

“We won’t get the same prices today,” he told AFP with a smile.

On Sunday, after an emotional final tuna auction the previous day, the Tsukiji market’s famed “turret trucks” — one-man flatbeds with a barrel-shaped steering column at the front — began the mass exodus to the new site.

However, the move was a lengthy and controversial process. Few would contest the fact that Tsukiji was past its prime, and there were concerns about outdated fire regulations and hygiene controls.

In contrast, the new market, located a few kilometers to the east at Toyosu, boasts state-of-the-art refrigeration facilities and is nearly twice as big again as Tsukiji, already the world’s largest.

But the new market is located on the site of a former gas plant and the soil was found to be contaminated, forcing local authorities to spend millions of dollars to clean it up and delaying the move.

Just before Tsukiji closed its doors for the final time, several hundred protesters staged a demonstration trying to block the move in the courts, arguing that Toyosu was unsafe.

Tokyo mayor Yuriko Koike has insisted the new complex is safe and will provide a “cutting-edge” environment for the selling of fish.

The early morning tuna auction at Tsukiji became an institution and a must-see for tourists to the Japanese capital, who lined up from the night before to be one of the 120 allowed to witness the organized chaos.

Especially at the first auction of the new year, wholesalers and sushi tycoons have been known to pay eye-watering prices for the biggest and best fish.

For some Tsukiji veterans competing in their first auction in the brand-new, sanitized and enclosed new arena, the move has deprived the market of some of its soul.

“It’s not the same atmosphere as at Tsukiji,” said Lionel Beccat, a Michelin-starred chef who has been going to the pre-dawn auctions for years.

“On a purely professional level, maybe Toyosu is better, but on a sentimental level, it’s Tsukiji. The head says yes, but the heart says no,” Beccat told AFP, referring to the new location. /cbb