7 things you should know about lotto 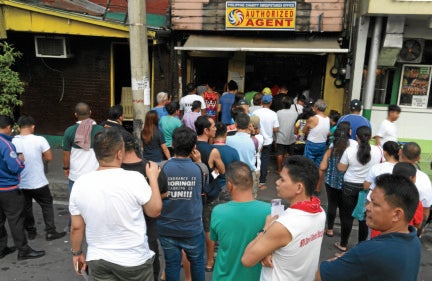 Bettors queue for Ultra Lotto 6/58 at an outlet along A. Reyes Avenue in Makati City as the jackpot prize reached more than  P1 billion on October 9, 2018. EDWIN BACASMAS/INQUIRER

Thousands of Filipinos try their luck on the lottery or lotto and pray that they hit the jackpot, especially now that the pot has soared to more than P1 billion. It would seem that placing a lotto bet has become part of the Filipino life.

But how aware are we when it comes to playing lotto?

Arnel Casas, Assistant General Manager for Gaming of the Philippine Charity Sweepstakes Office’s (PCSO), helped INQUIRER.net compile a list of seven things that the betting public should know about lotto here in the country:

In Tuesday’s draw, the jackpot for the Ultra Lotto 6/58 already reached P1.026 billion.

Casas said that in the entire history of the lotto in the country, this has been the highest pot ever recorded by the agency.

Prior to this, the highest prize for the lotto jackpot was P741 million back in November 2010. It was won by a solo bettor from Olongapo, Zambales

Despite the staggering pot, the winning bettor will not be able to take the whole P1 billion winnings home.

Under the Tax Reform for Acceleration and Inclusion (TRAIN) Law, a 20 percent tax was imposed on lotto winnings of more than P10,000.

If a bettor solely wins the P1.026 billion pesos jackpot prize, he would only be taking home around P820.8 million minus the 20 percent tax.

The PCSO said the current rules and regulations of the lotto game does not specify a ceiling amount for the jackpot.

“As this is the first time that the jackpot reached more than P1 billion and counting, a study is now being done by the PCSO for possible amendments to the game rules,” Casas said, noting that the ticket sales have increased by 800 percent because of the P1 billion prize.

As such, for as long as no one correctly guesses the winning lotto combination, the jackpot will continue to soar.

According to Casas, both locals and foreigners alike can try their luck and place bets for the P1 billion prize for as long as they are 18-years old and above and have valid tickets.

“No restrictions on tourists and foreigners. For so long you have the valid ticket, you can claim your prize,” Casas said.

Casas said the winning ticket should be free from any mutilations, erasures or stains that would make any number or numbers printed on the ticket unreadable.

“For as long as the information printed in the ticket are readable and the ticket serial number can be validated manually through the lotto terminals, the ticket is valid,” Casas said.

Once the jackpot has been won, the winner is required to bring a community tax certificate, two valid IDs, and of course the winning ticket, to the PCSO Main Office in Mandaluyong, in order to claim the prize.

The use of the two valid IDs is to establish the winner’s identity and to validate that he or she is 18-years old and above, Casas said.

Casas added that within 30 minutes to one hour, the winner could already claim the check that would make him P800 million richer.  /muf