Mocha to push for OFW benefits in Congress | Inquirer News

Mocha to push for OFW benefits in Congress

Mocha Uson has yet to decide whether to run for the Senate or the House of Representatives but she said that, if elected, she would propose a law to give aid to overseas Filipino workers who decide to return to the country.

Uson said she relayed to President Rodrigo Duterte her dilemma on which branch of the legislature to run for and he promised to support her candidacy. 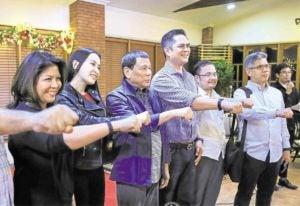 Mocha Uson (second from left) makes the fist-bump gesture beside President Rodrigo Duterte in this file photo. Uson, who announced that she would be running for office in 2019, said she intended to be the voice of ordinary Filipinos if elected either to the Senate or House of Representatives. MALACAÑANG PHOTO

“Sinabi ko po sa kanya kahapon (I told him yesterday), ‘Mr. President, I actually announced that I am going to run, either for Congress or Senate. I am not sure. [I will run] because I want to continue your fight,” Uson said in a news forum on Wednesday.

READ: Mocha Uson to run as independent in 2019 polls

“Ang sinabi naman niya (He said), ‘I will support you.’ Kaya nagpapasalamat po ako (That’s why I am thankful),” she added.

Uson also revealed that one of her “battle cries” for the 2019 elections will include the rights of overseas Filipino workers (OFW).

She said there was no law that gives aid to OFWs when they decide to return to the country.

Aside from Duterte, Uson also said that presidential daughter and Davao City Mayor Sara Duterte-Carpio has expressed support for her bid in the upcoming midterm polls. /cbb