Poachers poison five lions, chop off face and paws of one 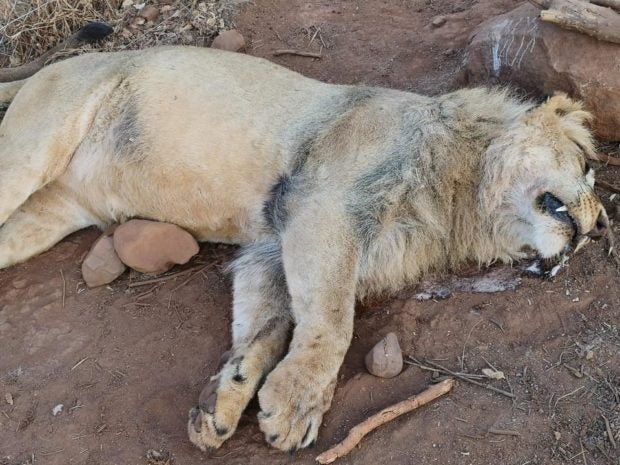 Poachers poisoned five lions in Limpopo, South Africa on Oct. 1, going as far as to mutilate the face and the two front paws of one of the big cats.

“Tragedy struck last night at our park,” wrote the official Facebook page of Akwaaba Predator Park on Tuesday, Oct. 2, uploading photos of the dead lions. “We lost five lions to murderers. That is what they are, they killed our babies. Our hearts are broken.”

The park’s security guards called the farm manager after making their rounds at around 11:30 p.m., Akwaaba Predator Park’s manager, Bronwyn Moss, told Kormant last Wednesday, Oct. 3. The security personnels noticed that there was something wrong with the big cats in the enclosure.

When the farm manager arrived, he discovered the lions were already dead.

“He saw a lot of blood in the one cage and found that the one lion’s two front feet and face were chopped off,” Moss stated. “We suspect that the lions were all poisoned at the same time, but the poachers were disturbed by the security guards before they could get to the other lions.”

An investigation of the incident has been launched. The park is offering 100,000 South African Rands (around P367,000) to anyone who can give information on the suspects. Kate Matriano/JB

WATCH: Lion at Manila Zoo having a ‘seizure’

Read Next
Vilma Santos endorses Romulo Macalintal for senator
EDITORS' PICK
Beyond the Chocolate Hills: A farm-to-table, heritage culinary adventure of Bohol
MyCitiHomes premiers PH’s first 3-star certified BERDE District residential development
‘Crash Landing on You’ couple confirms pregnancy
Enrile contracts COVID-19: ‘To my critics and enemies, I am not going to die yet’
Metro Manila’s COVID-19 positivity rate jumps from 3.9% to 5.9% — OCTA
House energy committee chair Arroyo bats for cheap electricity
MOST READ
Enrile contracts COVID and snipes at critics, foes: ‘I am not going to die yet’
Duterte: It was correct for Bongbong Marcos to ‘decline’ presidential debates
Russia steps up missile strikes on Ukraine as G7 leaders gather
PH firm partners with US corporation to set up weapons assembly in Bataan
Don't miss out on the latest news and information.