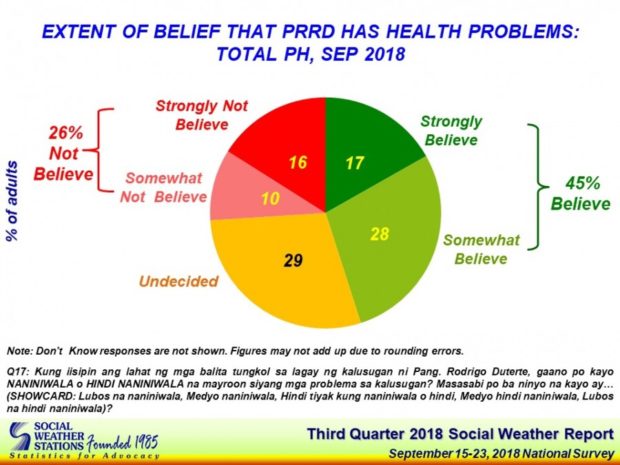 The survey conducted from September 15 to 23, 2018, revealed that 45 percent of adult Filipinos believe that the President has health problems while 26 percent do not. Twenty-nine percent are undecided.

Meanwhile, more than half are worried that Duterte will have health problems in the future.

(How worried are you that Pres. Rodrigo Duterte will have health problems? Are you: Worried a great deal; somewhat worried; not too worried; not worried at all?)

The SWS survey was conducted using face-to-face interviews of 1,500 respondents, 18 years old and above, nationwide.

The sample includes 600 in Balance Luzon, and 300 each in Metro Manila, the Visayas, and Mindanao.

It has a a sampling margin error of ±3% for national percentages, ±4% for Balance Luzon, and ±6% each for Metro Manila, Visayas, and Mindanao. /cbb