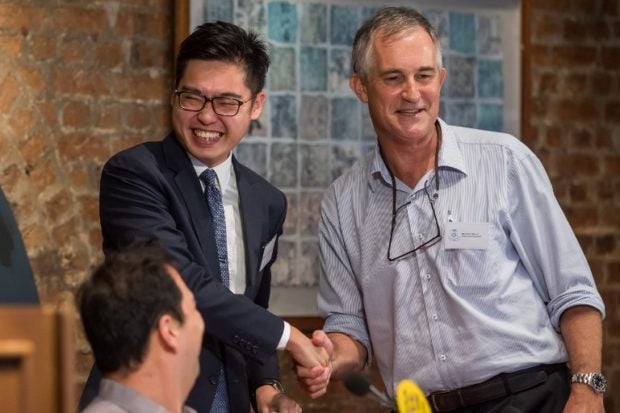 In this photo taken on August 14, 2018, Victor Mallet, a Financial Times journalist and vice president of the Foreign Correspondents’ Club (FCC) (right) shakes hands with Andy Chan, founder of the Hong Kong National Party, during a luncheon at the FCC in Hong Kong. Hong Kong has refused to renew the visa of the senior Financial Times journalist after he hosted a talk by Chan, an activist advocating the city’s independence from China, the newspaper said on October 5, 2018. AFP

HONG KONG, China – China on Saturday warned foreign countries not to “interfere” over Hong Kong’s decision to effectively blacklist a senior Financial Times journalist after the UK and other governments expressed alarm over eroding freedoms in the former British colony.

Victor Mallet, the FT’s Asia news editor and a British national, earned the ire of authorities for hosting a speech in August by Andy Chan, the leader of a tiny pro-independence political party.

The FT said Friday that immigration authorities in Hong Kong had declined to renew Mallet’s visa, prompting the UK to request an “urgent explanation” for a decision described as unprecedented by rights groups and media organizations.

“The Central Government firmly supports the SAR (Hong Kong) Government in handling the related matters in accordance with law,” a spokesperson at China’s foreign ministry in Hong Kong said.

“No foreign country has any right to interfere.”

In a strident speech at the city’s Foreign Correspondents’ Club (FCC), where Mallet serves as vice president, Chan attacked China as an empire trying to “annex” and “destroy” Hong Kong.

China’s foreign ministry had asked the club to pull the talk, but the FCC refused, arguing that all sides of a debate should be heard.

Rival protesters picketed the lunchtime event and the city’s former leader Leung Chun-ying called for the club to be evicted from its government-owned premises.

“We have asked the Hong Kong government for an urgent explanation,” the UK’s Foreign and Commonwealth Office said in a statement addressing the visa denial.

“Hong Kong’s high degree of autonomy and its press freedoms are central to its way of life, and must be fully respected.”

Semi-autonomous Hong Kong enjoys rights unseen on the mainland, including freedom of expression, which are protected in the city’s Basic Law and the handover agreement between China and Britain.

But the space for dissent is shrinking as Beijing flexes its muscles.

It was the first ban on a political party since the territory reverted to Chinese control in 1997.

The US consulate said Mallet’s visa denial was “especially disturbing”.

“It mirrors problems faced by international journalists in the Mainland and appears inconsistent with the principles enshrined in the Basic Law,” US consulate general spokesman Harvey Sernovitz told AFP.

Hong Kong’s last British governor Chris Patten said the move was a “serious blow against free speech” as well as defying the promise of a high degree of autonomy made to the city when it was handed back to China by Britain in 1997.

A handful of demonstrators rallied outside Hong Kong’s immigration department on Saturday morning to protest the decision.

“No political red line. We support free press,” protesters chanted as they shredded a strip of red fabric to create a long ribbon.

The slogan was in response to comments by Hong Kong’s former leader Leung Chun-ying — whose administration faced down major youth-led democracy protests in 2014 — that discussion of Hong Kong independence “is an absolute and clear red line”.

The decision to deny Mallet a new visa was welcomed by pro-Beijing media in the city, however.

A commentary in the Ta Kung Pao newspaper said the veteran journalist had to “pay the price” for giving exposure to Hong Kong’s fringe independence movement, and said authorities may still act to evict the FCC from the premises it has occupied since 1982. /cbb

Read Next
New US SC justice a conservative stalwart
EDITORS' PICK
Cherry Mobile teams up with Cloud Panda PH, launches online store
WHO resumes hydroxychloroquine coronavirus trials
COOCAA TV Bounce Back Sale offers up to 50% off
DOLE eyeing P20-B subsidy for MSMEs
Over P785M distributed to 98K PUV drivers in Metro Manila — DSWD
SMDC The Good Guys on the Go
MOST READ
It’s final: Anti-Terror Bill now only needs Duterte’s signature
Kris Aquino goes home after quarantining for nearly 3 months in Puerto Galera
‘She had no right to be in Singapore’: Youth pleads guilty to abusing Filipino maid
Piolo gets first call slip from ABS-CBN to resume ‘ASAP’ taping
Don't miss out on the latest news and information.