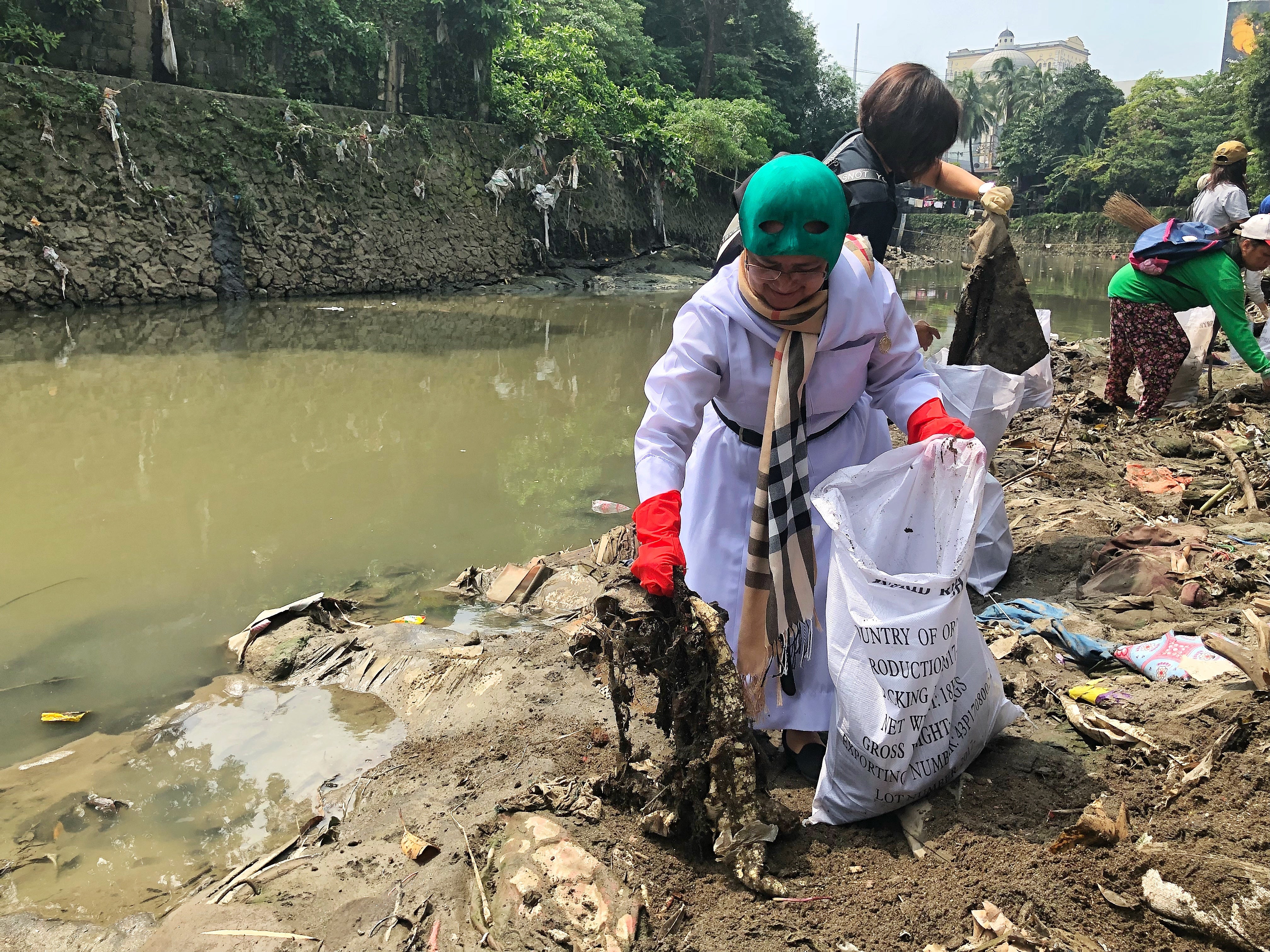 HANDS-ON A nun joins the cleanup of the San Francisco River on Friday at Barangay Talayan, Quezon City, where she and other volunteers collected 30 sacks of garbage in just 20 minutes. —JHESSET ENANO

Amid rapid urban development in Quezon City, the San Francisco River has stood as silent witness to the changes that people had wrought in the area.

Decades ago, Franciscan priests followed its banks as they trekked from Laguna and Quezon provinces to their retreat seminary in what is now known as the San Francisco del Monte enclave, named after St. Francis.

Before the river became a dumping area for trash, its waters offered hours of frolic and fun for children in the community. Today, the silted river is choking under tons of garbage and presents a considerable threat to families living nearby when heavy rainfall swells its banks.

On Friday, the Association of Major Religious Superiors of the Philippines (AMRSP) decided to step in and conduct a cleanup drive in an attempt to bring this sluggish river back to life.

But the cleanup campaign is only part of AMRSP’s bigger dream of having a law that would declare Philippine rivers “living entities,” bodies of water that have their own inherent rights against harm and pollution.

‘Stewards of the Earth’

“Our understanding is anthropocentric.  We may believe we are the center of the ecosystem, but we are just part of it,” said Fr. Angelito Cortez, AMRSP coexecutive secretary.

“If human beings have rights, so does nature. And because we are the stewards of the Earth, we should fight for them because they cannot speak for themselves,” he added.

If rivers were declared living entities, then the act of polluting them would be “tantamount to harming a human being,” the group said. This means that proof would no longer be required to show that discharging waste into rivers is harmful, since “the act of polluting the waters will be a crime against the river itself.”

Cortez said AMRSP, which is composed of some 300 religious congregations working in missions in the country, would be organizing meetings with other religious groups to discuss the possible bill.

Their haul of 30 sacks of trash after a 20-minute cleanup is proof enough that such legal intervention is needed.

Should such a bill be passed, it would be a landmark law in the country, said environmental lawyer Antonio La Viña.

If rivers were declared living entities, it means that their functions and needs must be respected and nurtured, independent of human beings and their utilitarian purpose, La Viña said, adding that the country’s laws protecting the environment are inadequate.

In 2017,  a similar law benefited the Maori tribe in New Zealand after the Whanganui River was granted the same legal rights as a human being.

AMRSP’s proposal will have legal basis in the 1987 Constitution itself, La Viña said, citing a section in the Declaration of Principles and State Policies, which says that the state shall “protect and advance the right of the people to a balanced and healthful ecology in accord with the rhythm and harmony of nature.”

The bill could also serve as a precedent that will extend protection to trees and other living beings, he added.

In 2004, five Metro Manila rivers were declared “biologically dead,” which means they no longer have oxygen and can no longer support life. The decaying rivers that had succumbed to waste and industrial pollution are the Pasig River, Marikina River, San Juan River, Parañaque River and Navotas-Malabon-Tenejeros-Tullahan River.

More than a decade later, the rivers have started to show signs of life, as both government and nongovernment groups have conducted hundreds of cleanup drives and other rehabilitation efforts to clear the waterways, including the forced removal of families from the riverbanks.

For Cortez and other men and women of the faith, their actions simply put into practice Pope Francis’ “Laudato Si,” the papal encyclical that called on people to live in harmony with nature, rather than dominate it.   The Pope also called for “swift and unified global action” against global warming and environmental degradation.

“Water in itself is a basic necessity. We have to reconnect with waters and rivers, which have witnessed how life has changed over time,” he said.

“We must play our roles in saving these bodies of water, as they also play a significant role in our lives,” Cortez added. —With a report from Cedrix Perez