What Went Before: Estrada, Arroyo and the VMMC | Inquirer News
Close
menu
search

What Went Before: Estrada, Arroyo and the VMMC 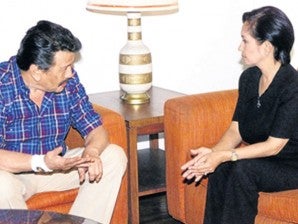 NOW THE SHOE IS ON THE OTHER FOOT In this photo taken on May 19, 2001, then President Gloria Macapagal-Arroyo visits ousted President Joseph Estrada at the presidential suite of Veterans Memorial Medical Center in Quezon City where he was detained along with his son, then San Juan Mayor Jose “Jinggoy” Estrada. Malacañang file photo

Since then, she has been staying in a 16th-floor suite at St. Luke’s Medical Center in Taguig City, where she was served on November 18 a warrant for her arrest for alleged electoral sabotage and booked on the charge the next day.

Arroyo was subjected to three operations on her cervical spine in July and August. The last was conducted on August 24, with the doctors reconstructing the anterior part of her cervical spine using a titanium mesh cage with a bone graft that was harvested from her pelvic bone.

She was discharged on September 2.

The 157-square-meter presidential suite on the 16th floor costs P50,000 a day, is six times the size of a private room, and has its own jacuzzi.

It has a commanding view of the tony The Fort, a living room, a dining room with an eight-seat table, a pantry, an extra guest room which can accommodate two beds, and a jacuzzi.

Pasay City Judge Jesus Mupas has ordered the transfer of Arroyo from St. Luke’s to Veterans Memorial Medical Center (VMMC), which was built in 1955 by virtue of a US congressional act providing for the medical needs of war veterans.

It sits on a sprawling 54.9-hectare prime government lot that includes an 18-hole golf course on North Avenue in Quezon City.

In 1982, the ownership of the VMMC property was transferred from the National Housing Authority to the VMMC administration by virtue of a presidential proclamation.

Over the last five decades, the 700-bed facility has extended its services not only to veterans and military retirees but also to their dependents. It is also open to serve PhilHealth members.

Former President Joseph Estrada and his son Jinggoy spent three years in detention in that suite. They were first brought to the hospital on April 28, 2001, to undergo a full medical checkup after spending three days in Camp Crame since their arrest to face plunder charges.

They were then transferred to a detention facility at Fort Sto. Domingo in Santa Rosa, Laguna province.

After complaining of fever and chills, Estrada was brought back to VMMC on May 12. He  remained there up to Oct. 16, 2003, after which he was moved to Camp Capinpin, base of the Army’s 2nd Infantry Division, in Tanay, Rizal province, for security reasons.

It was at the VMMC presidential suite where Estrada and Jinggoy cast their ballot for the May 14, 2001, elections.

In June 2001, the Sandiganbayan formally allowed Estrada to remain in detention at the hospital based on his latest medical bulletin confirming that he was suffering from chronic obstructive pulmonary disease.

In December 2001, the Sandiganbayan allowed him to undergo cataract surgery at the Asian Eye Institute in Makati City. But the court turned down his other demands, including a trip to the United States for a knee replacement operation and a visit home for Christmas.

The Estradas hosted a lavish Christmas party at VMMC, which was highlighted by a raffle of appliances, among other prizes. The celebration later drew criticism.

Then acting VMMC Director Ricardo Blancaflor said that during his detention, Estrada paid for his own expenses and did not avail himself of the hospital’s services, except for the nurses who checked on his blood pressure regularly.

The Estradas brought their own food, doctors and medicines.

To secure the former President, Blancaflor said the hospital perimeter was surrounded by 100 policemen from the Central Police District. The internal and close-in security were also provided by the Special Action Force.

The second floor of the outpatient department was converted into “barracks” for policemen on perimeter security. Policemen on “internal security” maintained an office near the presidential suite.

In March 2003, Jinggoy left VMMC after the Sandiganbayan allowed him to post bail of P500,000 because of weak evidence against him.

In October 2003, Estrada was transferred from VMMC to Camp Capinpin. In March 2004, the court allowed him to literally cross the highway from the camp and settle in his spacious rest house nestled on a 15-hectare property.

Estrada was convicted of plunder by the Sandiganbayan in September 2007. A month later, Arroyo pardoned him. Ana Roa and Lawrence de Guzman, Inquirer Research