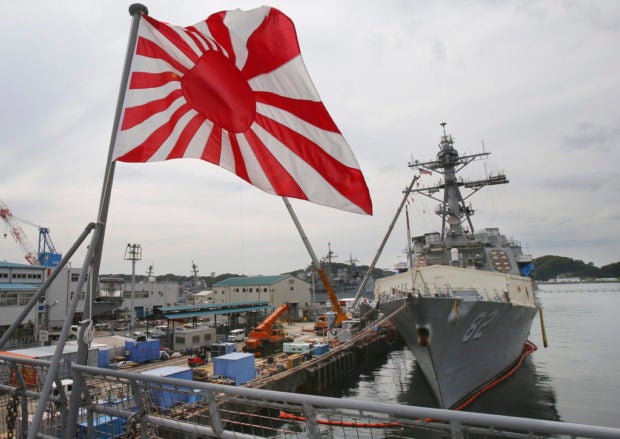 In this May 27, 2014, file photo, Japan’s military flag, the Rising Sun Flag, flutters on the Japan Maritime Self-Defense Force tank landing ship JS Kunisaki anchored in Yokosuka near Tokyo, getting ready for participating in the Pacific Partnership 2014. South Korea has reiterated a demand that Japan should remove its “rising sun” naval flag from a warship participating in an international fleet review at Jeju island next week. (AP Photo/Koji Sasahara)

TOKYO — Japan has announced it won’t send a warship to an international fleet review hosted by South Korea next week after Seoul requested the removal of the Japanese navy’s “rising sun” flag.

Many South Koreans see the flag as a symbol of Japan’s World War II aggression, and protested its use during the October 10-14 event near Jeju island.

Japanese officials said the flag, portraying a red sun with 16 rays extending outward, is mandatory under Japan’s laws and is recognized as identification for the Japanese military under an international maritime convention.