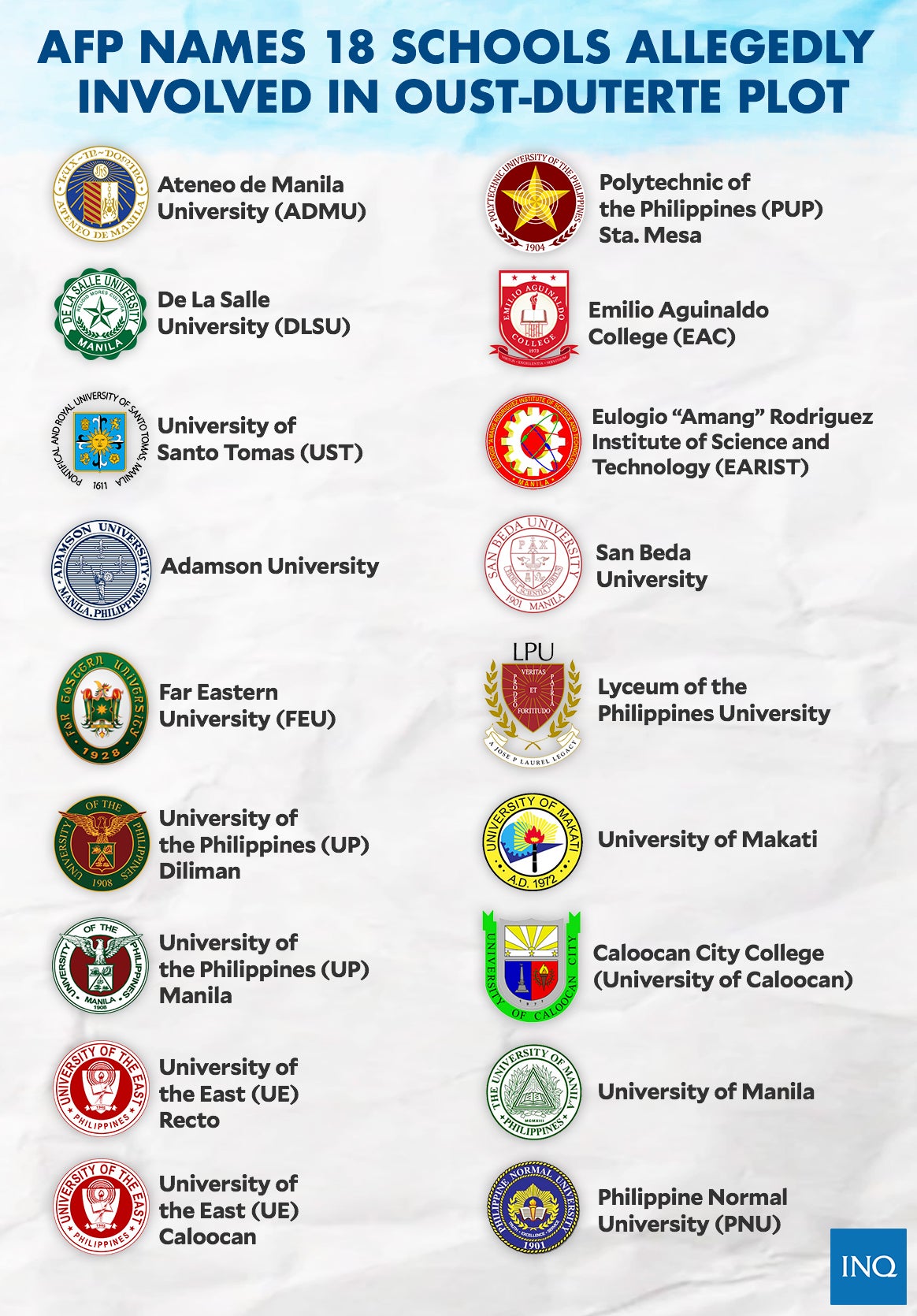 A senior military officer on Wednesday warned that communist rebels were recruiting students from some of the country’s top universities to join a plot to oust President Rodrigo Duterte so they could establish a dictatorship similar to the brutal Khmer Rouge regime in Cambodia that killed millions of its own people.

Brig. Gen. Antonio Parlade Jr., assistant deputy chief of staff for operations of the Armed Forces of the Philippines, told reporters that the Communist Party of the Philippines (CPP) and its armed wing, the New People’s Army (NPA), had infiltrated 18 schools in Metro Manila, including De La Salle University (DLSU) and Ateneo de Manila University (ADMU).

Although this was “nothing new” and was practically common knowledge, Parlade said school officials could be unaware that the CPP was behind the recruitment for the oust-Duterte movement.

He said films about human rights abuses under dictator Ferdinand Marcos were being shown “to incite students to rebel against the government, incite resurgence of the First Quarter Storm (FQS) experience among students while projecting President Duterte as the new Marcos.”

The FQS refers to the first three months of 1970 when Filipino youths and students rose in massive demonstrations against Marcos’ emerging authoritarianism.

Parlade also said the rebels were exploiting other issues, such as extrajudicial killings, to incite students to revolt.

According to him, the CPP-NPA intends to establish a “proletarian dictatorship” if it succeeds in ousting the President.

Proletarian dictatorship, he explained, would involve the purge of millions of professionals and intellectuals such as what had happened in Cambodia under the Khmer Rouge.

Former Education Secretary Armin Luistro, who is now president of De La Salle Philippines, a network of Lasallians in the country that includes DLSU, said rebel recruitment “does not sound news to me” and questioned the military’s motives for disclosing what appeared to be intelligence information to the public.

“If you want to contain that, don’t you want to come up with other corroborating facts? And then sit down with authorities to come up with a program to stop it, if it’s a violent plot or something? But bringing it out on the media, what will that do? It will only scare people. So that really is strategically wrong,” Luistro told the Inquirer.

In a statement sent to the Inquirer, UMak president Tomas Lopez said his school “protects the rights of our students to free speech and assembly, (and) strongly adheres to the principles of democracy as enshrined in our Constitution” and that he was unaware of any student activity linked to the rebels.

“It’s not surprising we have many young people taking stands, which the military then labels as ‘red’ right away,” he said in a statement sent to Inquirer.

Tan said the military’s list of “Red” schools included many that were not known previously for activism.

“So if indeed all these institutions are becoming socially involved, then it says something about the current government,” he said.

UP student regent Ivy Taroma protested against what she described as the military’s “Red tagging” of the schools to justify repression that would endanger the lives of student activists.

“Instead of responding to the students’ clamor for genuine educational reform and a nationalist, scientific and mass-oriented educational system,” she said, “the Duterte administration responds to those calls with unrestrained state fascism.”

“He has Red-tagged institutions, youth groups and individuals, and has exposed them to grave peril,” Taroma said.

The Duterte administration is “very desperate” in trying to scare the public into submission by spreading the ouster plot yarn and saying the communists were involved, according to Nickolo Domingo, chair of the UP Diliman chapter of the left-wing youth group Anakbayan.

In his phone interview with reporters in Camp Aguinaldo, Parlade, who was traveling in the Visayas, did not link the alleged rebel recruitment specifically to the so-called Red October plot to oust Mr. Duterte.