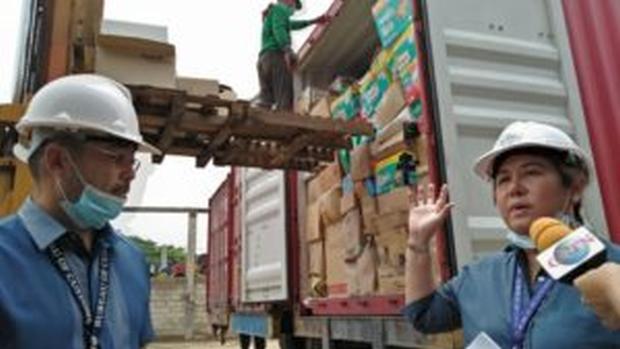 One of the container vans containing the abandoned items intended for survivors of Supertyphoon Yolanda (Photo by JESSA MAE O. SOTTO / Inquirer Visayas)

CEBU CITY — The Bureau of Customs in Central Visayas will dispose relief goods intended for survivors of Supertyphoon Yolanda in northern Cebu.

Cebu Customs District Collector Elvira Cruz said they decided to condemn these donated items because they had been left idle for four years since being delivered to Cebu in January 2014.

“This was meant to be donated for the Yolanda victims [in Cebu],” Cruz said. “But it was not processed because the donor did not want to pay taxes and at the same time wala siyang [he had no] permit. Wala siyang [He had no] exemption.”

The items included used clothes, diapers, canned goods and body products that could no longer be used.

The donated items in three of the four container vans – which came from Belgium, the United Kingdom and Norway – were taken to RRDS Petro-Chemical Industries, Inc. in Barangay Paknaan in Mandaue City where these would be incinerated.

While the donors were not able to secure a tax exemption from the Department of Finance, Cruz said the three consignees of the goods failed to go through the process to have the items releases, such as paying of charges for storage and demurrage.

The three consignees of the donated goods were ABS-CBN Foundation, DSV Air, and Sea and Wellmade Motors and Development Corp.

According to Cruz The consignees didn’t pay though they said they would. Then they told the bureau they were abandoning the shipments because of the charges.

Cruz also said the donors did not show their packing list that would determine the total amount of the undeclared items.

The BOC has then issued a notice and declaration of abandonment of shipment last June 2017.

Cruz said they tried to approached the Department of Social Welfare of Development in Central Visayas to put use of the items instead.

However, Cruz said the national agency refused because most of the items had already expired.

So the Bureau of Customs decided to just issue a condemnation order. /atm

Read Next
WATCH: Aerial footage shows houses in Balaroa leveled by Sulawesi quake
EDITORS' PICK
Infants bundled off; no one hurt in PGH fire
Tired of your Wi-Fi signal problems at home? Here’s a solution!
OPINION: Mischief Reef – where it all started
POVA x Mobile Legends Bang Bang: A partnership that’s built to win
CPA Australia and their designation: Advance your career
Fire-damaged PGH calls for donations
MOST READ
Leonen impeachment case moves forward in House
Hot, humid weather for PH on Monday — Pagasa
Mischief Reef – where it all started
Woman believed to be dead wakes up minutes before her cremation
Don't miss out on the latest news and information.