P1.3B for Boracay not released

BORACAY ISLAND—The P1.3-billion fund for the rehabilitation of Boracay has not been released more than five months after the island was shut down, officials said.

“We have not received a single centavo” from the Department of Budget and Management (DBM), Environment Undersecretary Ernesto Adobo Jr. said at a public hearing of the House committee on natural resources held at Casa Pilar resort here.

“The only money that we are using during this period of closure are the savings from our department,” Adobo said at the hearing that was also attended by Secretaries Roy Cimatu (environment), Eduardo Año (interior) Bernadette Romulo-Puyat (tourism) and Virginia Orogo (social welfare and development).

The DBM, in a statement, said agencies had sufficient funds to support rehabilitation projects in Boracay.

“The agencies in charge with (sic) the rehabilitation of Boracay have current funds in their 2018 budget, which they can readily use,” said the DBM statement.

“We emphasize that augmentation will come only if the current budget of agencies is insufficient,” it added.

The funds were supposedly for various rehabilitation-related programs and projects, including the cleanup of Boracay waters, removal of illegal structures, infrastructure projects and financial and social support for residents.

Half of the funds (P660.4 million) was allotted for safety nets including livelihood and employment assistance. 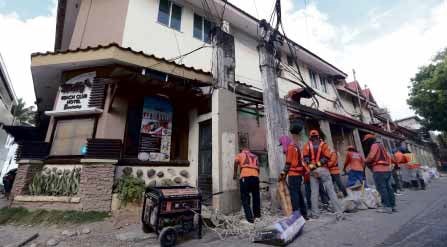 DEMOLITION Workers demolish parts of the Willy Hotel in Boracay about a month after the resort island was ordered closed for rehabilitation. The hotel was found to be on a no build zone. —LYN RILLON

Adobo said the agencies involved in the rehabilitation were financing projects through their regular funds.

The fund excluded that for the construction of an expanded 4.2-kilometer span of the island’s main road costing P490 million.

“We are hoping that the money we are requesting will be given to us,” he said.

He said some agencies, which were using their savings, still needed to request the DBM realignment of the funds.

The House committee members expressed surprise when told about the nonrelease of the fund with a “soft opening” of the island set on Oct. 26 and preceded by a dry run for local tourists on Oct. 15.

Cebu City Rep. Rodrigo Abellanosa said the committee would look into the delay in the release of the funds.