Ritual marks end of search for bodies in Itogon landslide 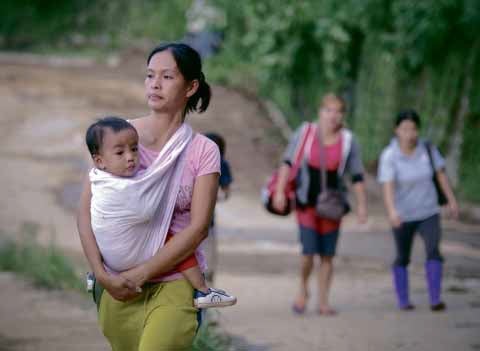 SEARCH FOR SAFETY A woman and her child leave their neighborhood at the site of a landslide that killed 89 residents in Itogon, Benguet. —RICHARD BALONGLONG

ITOGON, Benguet — An indigenous ritual and a Catholic prayer on Tuesday marked the end of retrieval operations for pocket miners and their families who were buried by a massive landslide at Sitio 070 in the village of Ucab, on Sept. 15.

The day began with the performance of the “pammakan,” a Kankana-ey ritual during which people butchered two pigs for the souls of 89 residents who were killed in the landslide at the height of Typhoon “Ompong” (international name: Mangkhut).

The pigs were cooked and offered to the spirits who needed to be at peace, before the meal was shared by about 500 people, many of them rescue volunteers.

The community also performed a cleansing ritual called “daw-es,” which required sacrificing a dog to prevent a repeat of the tragedy.

To many Cordillera clans, the dog is a symbol of death and protection.

Twice during the ceremony, the “mambunong” (ritual priest) splashed water on the ground to drive away any grief and bad luck from the landslide area, as well as from people who participated in the search and retrieval operations.

The retrieval operation was terminated on Sunday, and about 1,000 volunteers, soldiers, policemen and firemen were pulled out.

The Itogon government, however, was allowed to continue operations for three missing people.

Heavy rains fell for 10 minutes, immediately after the ritual.

“That is a good omen from the heavens,” said elder and Ucab village chair, Kennedy Waclin.

Following the ritual, a local priest, Fr. Benny Villapa, led prayers for the victims and blessed the temporary burial grounds for two unidentified bodies and some body parts.

At the landslide area, families hauled their belongings from houses which they were told to abandon because of the unstable ground. —Karlston Lapniten