Nobel winner: women physicists are ‘out there’ 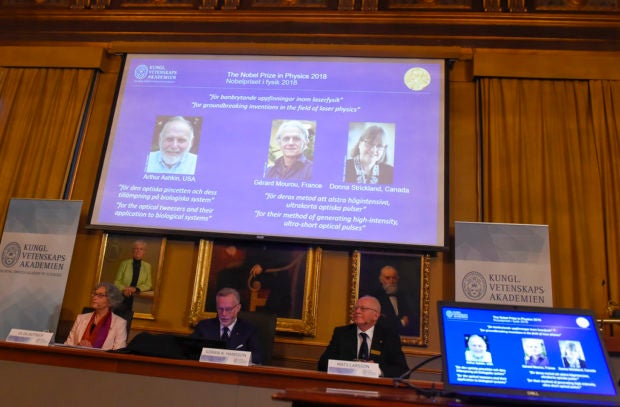 The Nobel Prize laureates for physics 2018 shown on the screen (from left) Arthur Ashkin of the United States, Gerard Mourou of France and Donna Strickland of Canada during the announcement at the Royal Swedish Academy of Sciences in Stockholm, Sweden on Oct. 2, 2018. AP

Speaking by phone shortly after the announcement was made in Stockholm on Tuesday, Strickland said: “You do always wonder if it’s real.”

The Canadian said she was honored to be one of the small number of female winners of the physics Nobel so far.

“Obviously we need to celebrate women physicists, because we’re out there,” she said.

Strickland added that “hopefully in time it’ll start to move forward at a faster rate, maybe.”

The awarding of the Nobel Prize in physics to Donna Strickland of Canada has ended a drought for women winning any of the prestigious prizes.

Strickland is the first woman to be named a Nobel laureate since 2015. She is also only the third to have won the physics prize — the first was Marie Curie in 1903.

Strickland was named on Tuesday along with scientists from the United States and France for their work with lasers.  /ee