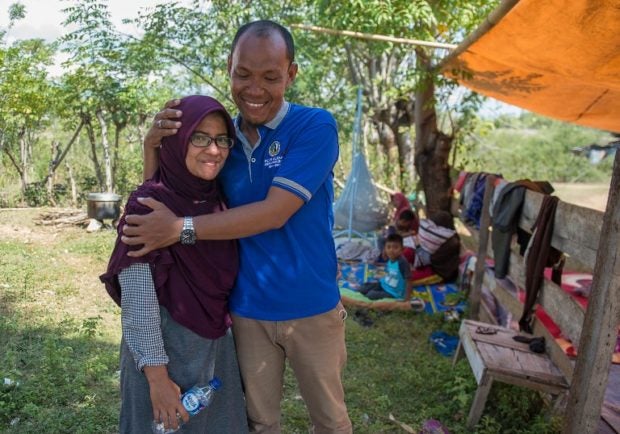 This picture taken on October 1, 2018 shows Azwan hugging his wife Dewi Prasasti in front of their house and family members in Palu, Central Sulawesi, after an earthquake and tsunami hit the area on September 28. AFP PHOTO / Bay ISMOYO

It was two agonizing days of searches through makeshift morgues and hospitals before Azwan found his wife Dewi alive and well after she was swept away in the tsunami that crashed into the Indonesian city of Palu.

Recounting the story beside her at a small roadside stall in the quake-hit city, the 38-year-old civil servant struggled to keep his emotions in check, tears welling up behind his glasses.

“I was so happy, so emotional — thank god I could see her again,” Azwan, who like many Indonesians only has one name, told AFP.

His is a rare story of hope, in a place where the sense of despair, grief and loss hangs thick.

Dewi was registering guests for a festival at a beachside hotel when the tremor sent a jolt through the ground.

Soon a wall of water was rushing at her.

“A wave came and hit me hard. When I regained consciousness, suddenly I was on the street in front of the hotel. I remember hearing people shouting ‘Tsunami! Tsunami!'” she told AFP.

Her clothes ripped and torn, she wandered through the debris-littered streets until she found an evacuation post where she stayed overnight.

“No food, no water,” she recalled. “We were told to wait until it was safe, while the aftershocks kept coming.”

On the other side of the city her husband, Azwan, was stricken with worry having survived the quake with their young daughter but without news of his wife.

After night fell, he began the grim task that would consume him for close to 48 hours: Checking patients and body bags at the city’s overrun medical centers.

“When I couldn’t find my wife in any of the bags I went back to the hospital, the police hospital, and checked the morgue,” he said.

“There were a massive amount of dead bodies there. It was so messy — on the terrace, inside, on top of each other.”

On Sunday, just as he was beginning to accept “God’s way,” his wife appeared, injured and limping towards the family home.

“When she got off the motorbike — it was euphoria,” he said.

“Everyone was crying. Our relatives broke into tears, they came to hug her.”

Dewi thanked God she was given “another chance” but was still struggling to come to grips with the ordeal.

“Even now I can’t believe I’m here alive,” she said.

“I’m still traumatized, especially because my sibling has not yet been found.”

At least 844 people are already known to have died in the twin disaster, but officials say that number is certain to rise.

The United Nations Office for the Coordination of Humanitarian Affairs has warned that 191,000 people are in urgent need of help, among them 46,000 children and 14,000 elderly.

Read Next
Flood hits parts of Edsa, QC, Makati amid sudden heavy downpour
EDITORS' PICK
IATF to LGUs: Issue ordinances vs attacks on frontliners, COVID-19 patients
Quick chat with Nicole Andersson: ‘You really don’t need much to be happy’
Robredo spox thanks Duterte for defending VP’s efforts vs COVID-19
Diokno to Duterte: OK to make fun of buck tooth, but focus on people’s needs first
Nograles: Cabinet members to donate 75% of monthly salary to aid COVID-19 fight
10 Filipinos positive for COVID-19 in UK, 7 in Ireland — envoy
MOST READ
Coronavirus hotbed Rizal to shut borders on April 6
Gov’t mulling quarantine period extension of 15-20 more days
Sotto on Isko Moreno’s call: We do our job without the media following our every move
‘Money Heist,’ ‘Tales from the Loop,’ ‘Killing Eve,’ ‘Never Have I Ever,’ ‘After Life’: Five not-to-be missed series this April
Don't miss out on the latest news and information.