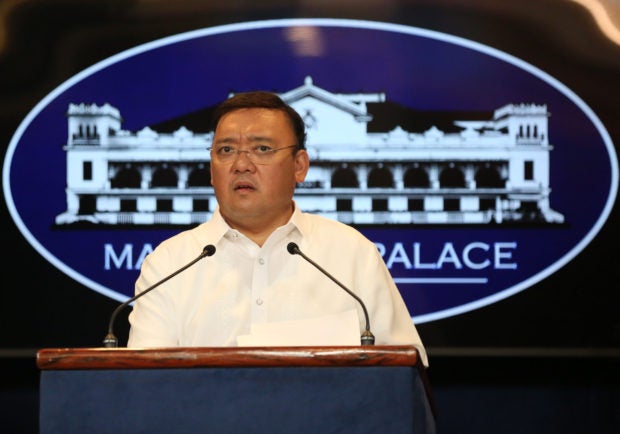 Malacañang has belittled claims that President Rodrigo Duterte’s supposed admission that his “only sin is the extrajudicial killings” could bolster the case before the International Criminal Court (ICC) and could even be a ground for the Chief Executive’s impeachment.

Presidential Spokesperson Harry Roque reiterated that Mr. Duterte’s statement does not amount to an admission.

“I would like to reiterate that the context of what the President said is that EJKs are the only criticisms levelled against him and no one has ever accused him of corruption. I don’t think this amounts to an admission because for it to be an admission or a declaration against self-interest, he must have explicitly admitted to the crime of murder which he has not,” Roque said in a Palace briefing.

READ:  Duterte: My only sin is the extrajudicial killings

He said he was “amused at statements of some of the critics of the President that this declaration or so called admission will bolster their complaint in the ICC.”

The Palace official further pointed out the President “was not admitting to murder” with his latest EJK remark.

“Before it can be admitted, it presupposes that the International Criminal Court already has jurisdiction,” he said.

Roque maintained the ICC could not have jurisdiction over Duterte.

“I reiterate, because of the principle of complementarity, the ICC can only have jurisdiction if our courts, our prosecutors, are unable or unwilling to exercise jurisdiction,” he said.

“We have a domestic statute also penalizing crime against humanity and therefore it is incumbent upon the complainants to show that the Philippine judicial system, the Philippine justice system, is simply not working,” he added.

In February, the ICC said it would start its “preliminary examination” on the alleged EJKs in the Philippines under Duterte.

In August, human rights groups and families of drug war victims filed a second case against Duterte before the ICC due to alleged EJKs in the country.

“To those who are saying this will bolster the case in the ICC, one there is no case pending in the ICC; number two, there can’t be no admission if there was not admission made to any criminal act; and number three, it presupposes that our domestics courts, domestic judicial system is simply not working,” Roque said.

Roque then urged the critics of Duterte to file a complaint against the President in Philippine courts.

He said “every lawyer, every judge in this country should be insulted by the statement made by the individuals that the ICC should exercise jurisdiction.”

“I refuse to concede and admit as Filipino lawyer, as an officer of the court that our courts are unable or unwilling to exercise jurisdiction. We have a working criminal justice system in the Philippines,” Roque said.

Roque also mocked remarks of lawyer Antonio La Viña that the EJK statement of Duterte could be a basis for impeachment.

“Let him start. He cannot vote because he’s not a member of Congress and I’m sure it will also be dismissed by Congress not because it’s a political process but because it utterly bereft of merit,” he said.

“He is simply wrong. He is not specialist in the field. He’s wrong. It presupposes that our judicial system is not working in the first place. It presupposed that the President actually admitted to murder. Did he? Not by virtue of the context of what he said,” Roque explained.

“As I said, there is even no crime as EJK. It’s a misnomer because you know there can be judicial killings in this country because we have done away with the death penalty,” he added.  /kga