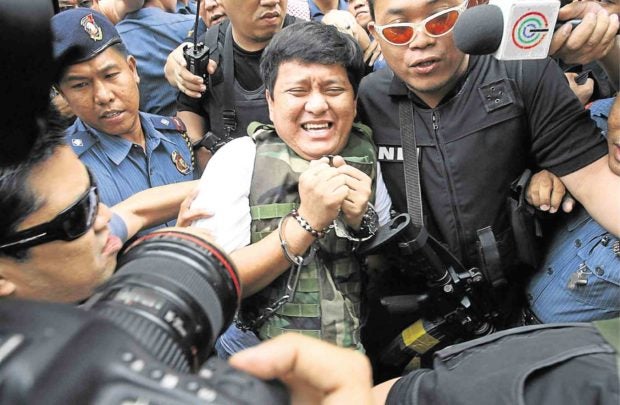 PRINCIPAL ACCUSED Andal Ampatuan Jr., a principal accused in the 2009 massacre of 58 people in Maguindanao province, is arrested in this Inquirer file photo taken on Dec. 18, 2009. —INQUIRER FILE PHOTO

GENERAL SANTOS CITY — A lawyer has confirmed that several witnesses to the 2009 killing of 58 people, including 32 journalists, in Maguindanao province have been offered bribes to recant their testimonies against the killers.

Nena Santos, a private lawyer for the families of 35 of the victims, including the family of Maguindanao Gov. Esmael “Toto” Mangudadatu, on Saturday said five witnesses had been offered P150,000, M-16 rifles for self-defense, P10,000 monthly allowance and houses in Datu Unsay town, Maguindanao.

Only one of the five witnesses accepted the offer, Santos said.

She identified the one who accepted the offer as Thonti Lawani, a corroborative witness.

The Inquirer tried but failed to find Lawani for comment.

Santos corroborated a recent statement by presidential spokesperson Harry Roque, who had represented some of the victims of the Maguindanao massacre, that some prosecution witnesses would no longer testify against Andal Ampatuan Jr., the former Datu Unsay mayor who led the group that allegedly perpetrated the worst election violence in Philippine history.

Roque said, however, that the case against Ampatuan Jr. remained strong despite the recantation of the witnesses, whom he did not identify.

Ampatuan Jr. and more than 100 heavily armed men—mostly policemen and militiamen—blocked the path of a convoy of vehicles carrying Mangudadatu’s wife, Gennalyn Mangudadatu, some female relatives, supporters and journalists who were going to file then Buluan Vice Mayor Mangudadatu’s certificate of candidacy for governor in the provincial capital.

The gunmen forced Mangudadatu’s relatives and supporters out of their vehicles and herded them to a rise in Sitio Masalay, Barangay Salman in Ampatuan town, on Nov. 23, 2009, and mowed them down with automatic fire.

The group then buried the bodies and the vehicles on the rise using a backhoe owned by the provincial government.

Mangudadatu tagged the Ampatuans and their followers as the killers and the government brought criminal charges against them, breaking the political clout of the clan on the province that reportedly produced not a single vote for movie actor Fernando Poe Jr., the closest rival of then President Gloria Macapagal-Arroyo in the 2004 presidential election.

Arroyo broke ties with the Ampatuans after the massacre, enabling the authorities to move quickly on the clan.

Only 115 are under custody. Seventy, including Sajid Islam, have been granted bail.

The rest are detained in a Taguig City jail where the Quezon City Regional Trial Court (RTC) holds hearings on the case.

The clan, whose wealth the government apparently has failed to freeze, has allegedly been trying to buy off witnesses as they grow weary from the slow pace of the trial, which began eight years ago.

Regional State Prosecutor Peter Medalle, who was replaced as lead prosecutor in 2012, had presented Lawani to the Quezon City RTC, Santos said.

“The four other witnesses offered bribes to retract their testimonies had been retrieved by the Witness Protection Program before payments could be made to them,” Santos said.

She said two of the witnesses had submitted affidavits attesting to the bribe offer by the Ampatuan camp.

In their affidavits, Abdulsatar Maliwawaw and Faisal Amilil alleged that Soy Kali, the village chief of Iganagampong, Datu Unsay, approached them in August and offered them money to retract their testimonies against Ampatuan Jr.

They alleged that Kali was an emissary of Ampatuan Jr.

Santos said offers of bribe to the families of the slain journalists had stopped.

In the early days of the trial, some of the families were allegedly offered at least P25 million each to withdraw their complaints.