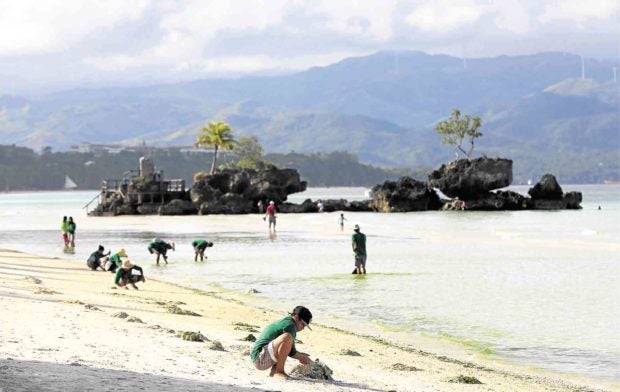 BORACAY ISLAND — Residents and business owners in Boracay await the reopening of the resort island to tourists on Oct. 26.

But government guidelines have drawn mixed reactions barely a month before the six-month closure ends.

“Some of the guidelines, many of which are already covered by local ordinances, are good,” said a longtime resident and business operator.

“Others are ridiculous, if not stupid,” he added.

The resident asked not to be named to avoid antagonizing officials overseeing the rehabilitation of the island.

Among the measures welcomed by people were those meant to protect the environment, especially the ban on construction of new establishments.

Conservationists also welcomed a limited or total ban on fireworks to protect the flying foxes, the endangered fruit bats that have roosting sites at the northern end of the island.

The population of the bats has significantly decreased due to encroachment on their habitat and human activity on the island.

The guidelines also included a ban on open fires and the use of kerosene gas and gas lamps along the beach, which would apply to popular fire dance performances.

“I agree with this because of the gas fumes,” the resident said.

The improved road network would include sidewalks.

Officials of the Boracay Inter-Agency Task Force said structures on sidewalks, like stalls, would be banned.

Also welcomed was a policy for establishments to use noise insulation systems.

Workers in the informal sector, however, expressed concern over the ban on vendors and stalls on the beach.

“There was no mention of what will happen to us,” said Olive Abanera, spokesperson for We Are Boracay, a group of vendors, tricycle drivers, masseuses, tour guides and other workers on the island.

“We, not business operators, have suffered the most,” she said.

“But we do not see us included in the plans,” she added.

Among the controversial measures being proposed was the use of tap cards or bracelets to regulate the number of tourists.

“What do they think of Boracay, a theme park?” a business operator said.

Jose Clemente, president of Tourism Congress of the Philippines, said he did not know of any beach or island destination that required tourists to wear bracelets to regulate the number of tourists.