Joan Carling: From ‘terrorist’ to UN Champion of the Earth 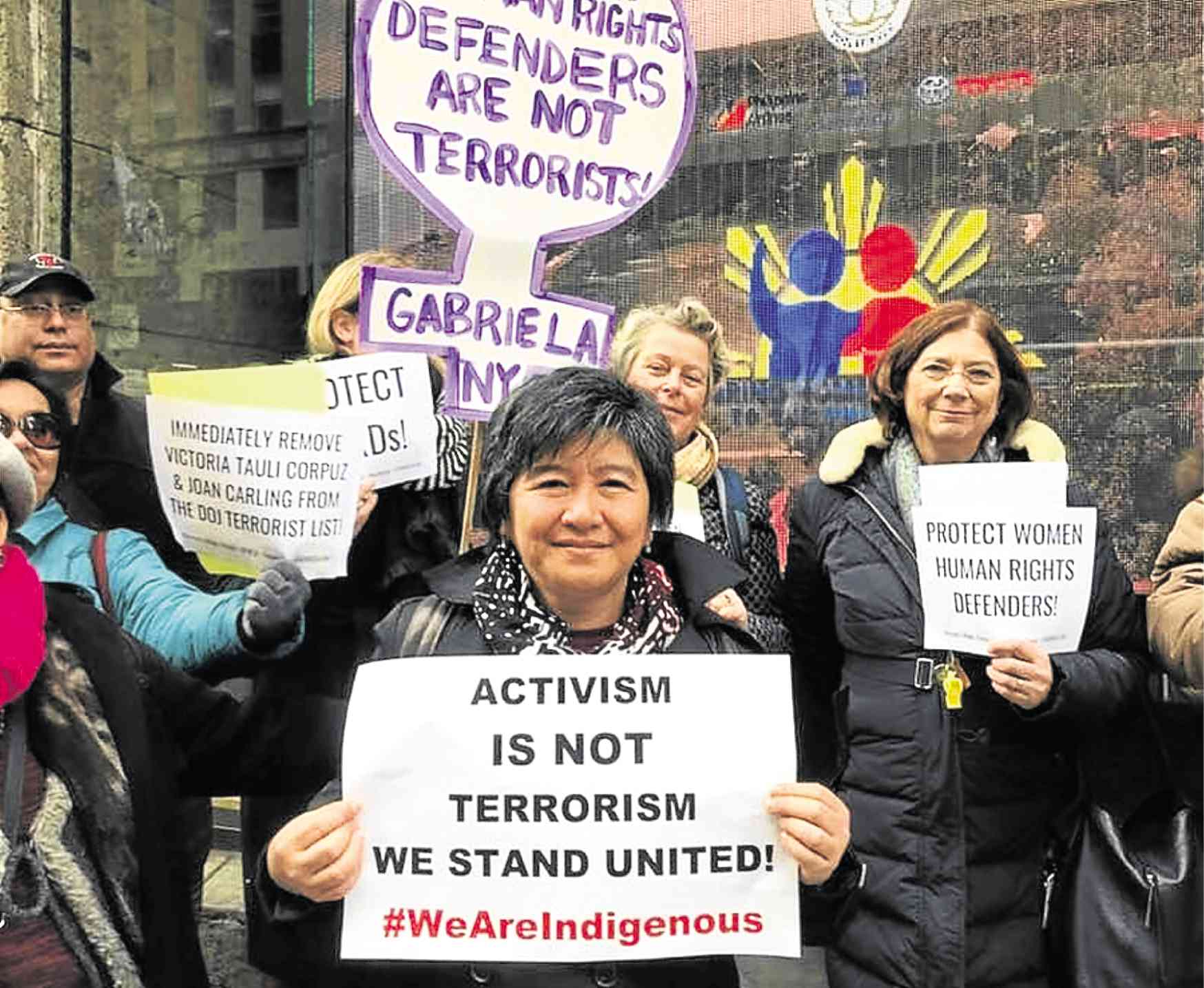 UNDAUNTED Despite being tagged a terrorist twice and having to live abroad to escape death threats, UN Champions of the Earth awardee Joan Carling continues to join protest rallies to defend the environment and the rights of indigenous peoples.

BAGUIO CITY — It was sweet vindication for Kankana-ey native Joan Carling who was twice described as a “terrorist” by the government, and had to live abroad to escape the death threats and danger that came with that profile.

The indigenous rights and environment activist was recently given the Champions of the Earth Award for lifetime achievement by the United Nations Environment Programme (UNEP) — the UN’s highest environmental honor — for her efforts in promoting the environment and the causes of indigenous peoples (IPs).

Her UN award was additional evidence that Carling was a “bonafide IP activist, and not a terrorist,” said her lawyer, Francesca Claver.

In her acceptance speech during the Sept. 26 award ceremonies in New York, Carling cited the sorry plight of the upland communities where she came from, and attributed the devastation wrought earlier this month by Typhoon “Ompong” (international name: Mangkhut) to “decades of corporate mining, deforestation and climate change.”

“This award becomes meaningful when it makes us understand that we all carry a responsibility for the devastated mining communities in the Philippines, and when it inspires us to act collectively to prevent such disasters and injustices from happening anywhere,” Carling said.

“We need to act now,” she added. “Each of us can take transformational actions—states, companies and investors must implement strong policies on environment and human rights; we must change our unsustainable production and consumption systems; the way we eat and travel, the way we unfairly disregard those who conserve our forests and biodiversity.”

The IPs who, she said, “have valuable knowledge that we need to learn from,” are ironically “at the receiving end of climate change and social injustice.”

Carling was a former chair of the militant Cordillera Peoples Alliance and a former secretary general of the Asia Indigenous Peoples Pact based in Thailand.

She was also appointed an indigenous expert by the UN Economic and Social Council and served as a member of the UN Permanent Forum on Indigenous Issues from 2014 to 2016.

According to a report posted by the online publication Bulatlat, Carling was attending a conference on ethnocide and militarization in Mindanao in 1989 when she was arrested along with 15 other delegates.

The group was accused of  being members of the communist New People’s Army (NPA), but was eventually released after their supporters staged a series of street protests.

While fighting to have her name removed from the government list of so-called terrorists, Carling decided to live abroad.

“We are still waiting for the court’s response to our motion [to have Carling and other activists removed from the list] and to hold in abeyance the publication of summonses,” Claver said on Friday.

Born in Baguio City in 1964, Carling grew up in a remote forest on a logging concession where her parents ran a shop. She completed grade school at Itogon town in Benguet province.

Families from interior Cordillera towns would sometimes come and trade for sugar, she recalled.

“My parents would offer them a meal, and it was from these simple exchanges that I learned humility, reciprocity and respect for our diverse indigenous communities and cultures,” said Carling, whose father was half-Japanese.

Carling completed high school and took up sociology and economics at the University of the Philippines Baguio in the 1980s.

In college, Carling said she did not seek a life of activism and had been private about her roots.

“I did not tell my classmates I come from the Kankana-eys of Mountain Province because of the negative perception about indigenous peoples at the time,” she said.

But her community beckoned. The Kankana-ey clans joined Kalinga communities that opposed the Chico River Dam project being pushed by then President Ferdinand Marcos in the late 1970s and ’80s.

The dam would have displaced 100,000 families in 16 Kalinga towns. Many of those who objected to the project were jailed and Macli-ing Dulag, a Kalinga tribal leader leading the opposition, was gunned down.

In 1984, Carling attended a memorial for the slain chieftain in Sadanga town, Mountain Province, where she embraced the IPs’ communal ethics.

“What I learned from our indigenous communities is this: When we destroy our lands, we destroy ourselves. By defending our land, we also defend our future and the generations to come,” she said.

IP activist Robie Halip said Carling’s UN award was a tribute to the role of IP women in the global people’s movement.

“Many IP communities still do not include indigenous women in decision-making processes and are not accorded leadership roles,” Halip said.

But defending the environment has reaped Carling a slew of threats to her life and security.

In March 2018, the Department of Justice (DOJ) included Carling among the 600 individuals who were considered terrorists by the Duterte administration for allegedly being members of the Communist Party of the Philippines and its armed wing, the NPA.

The UNEP has stepped up to defend Carling and Corpuz, and called on the Philippine government to drop the accusations against them. —With a report from Inquirer Research