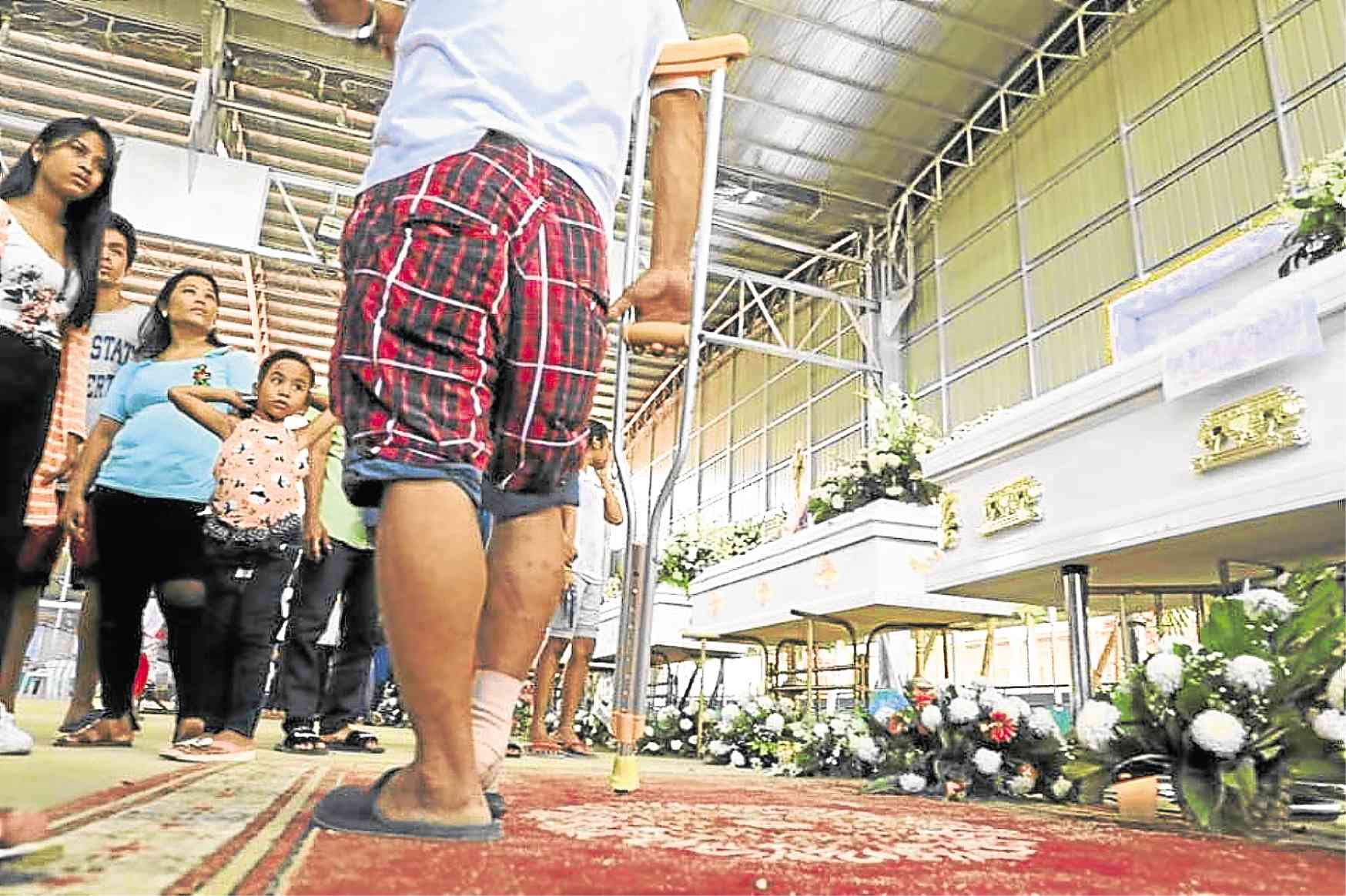 MOURNING A survivor in crutches visits the wake of some of those who died.

NAGA CITY, CEBU—Authorities have given up hope of finding any more survivors under the more than 20-meter-deep pile of rocks and soil that buried a village beneath the site of a limestone quarry here.

Workers were now focused on locating and retrieving corpses after no more sign of life has been detected in the village of Tinaan, where more than 50 houses have been buried in a landslide on Sept. 20.

Mayor Kristine Vanessa Chiong agreed with an assessment, made by the Incident Management Team, that no more survivor could be possibly found in the landslide.

“I trust that we have exerted all our efforts,” Chiong said.

“It’s going to be our seventh day of search and rescue operations,” the mayor added.

Baltazar Tribunalo Jr., head of the Provincial Disaster Risk Reduction and Management Office, said no sign of life had been detected anymore underneath the rubble.

“We were hoping for any sign of life,” Tribunalo said.

But he said workers had checked the area “for the third time but all sectors showed no sign of life.”

Chiong said two teams from the Department of Environment and Natural Resources central office had been assigned to the city to investigate the landslide and assess two possible relocation sites. 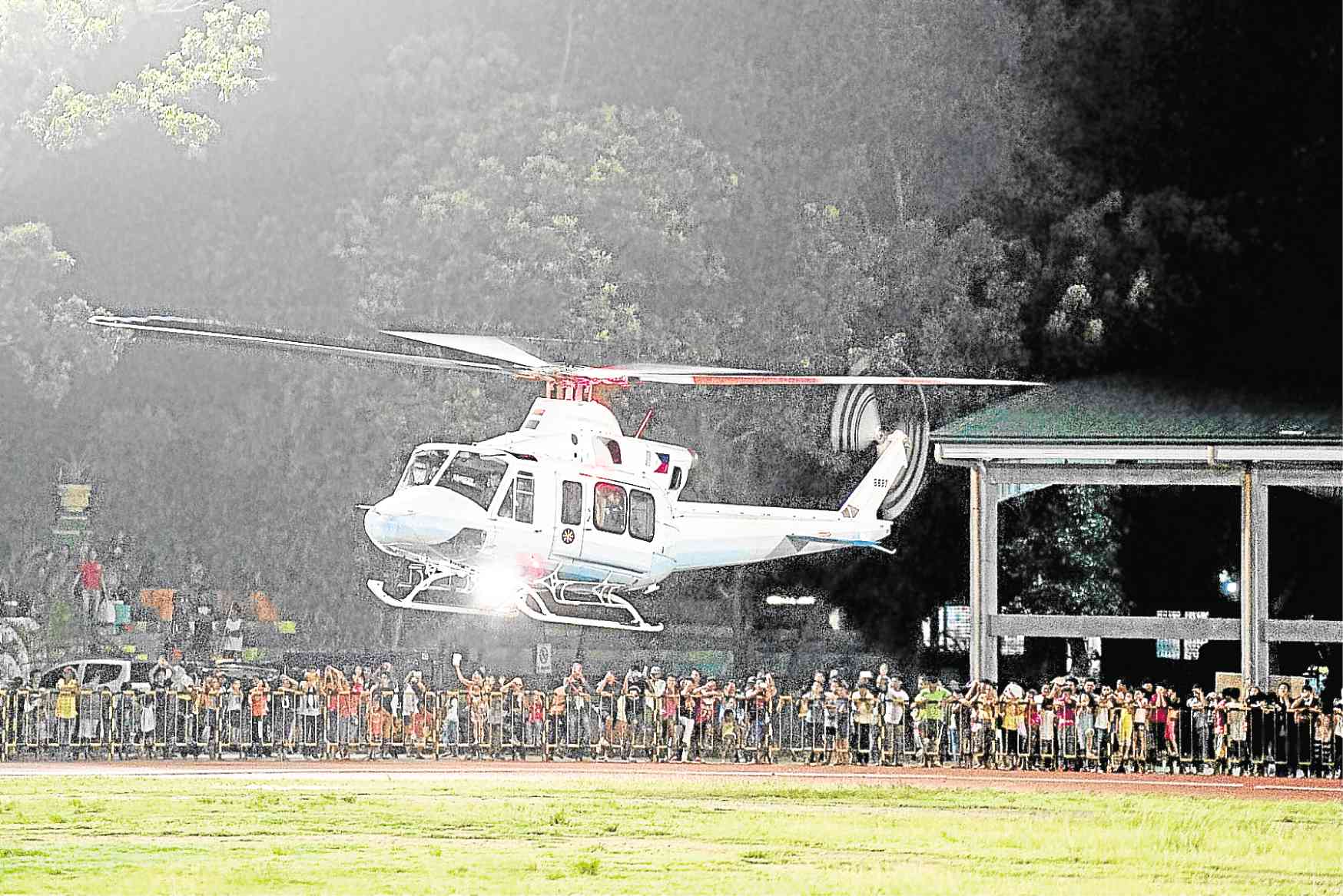 PRESIDENTIAL LANDING President Duterte arrives in a helicopter in Naga City, Cebu province, on Sept. 22 to condole with relatives of those who died in the landslide. —MALACAÑANG PHOTO

Residents continued to blame limestone quarrying by a cement company for the tragedy.

On Tuesday, at least 30 members of an environmental advocate group, Pusyon Kinaiyahan, and relatives of the landslide victims staged a protest rally in front of the Apo Cement Corp. (Apo Cemex) plant in the village of Tinaan and at City Hall to demand a stop to quarrying in the city mountain.

Waving small black flags, protesters screamed in anger at Cemex, blaming it for the deaths of villagers.

“If you did not quarry the mountains, there would be no landslide and those people would not have died,” said Bro. Peter Simon Jardinica of Pusyon Kinaiyahan.

Apo Land and Quarry Corp. (ALQC), raw material supplier of Apo Cemex, has mining rights over an area in the community of Tagaytay in Tinaan.

But Chito Maniago, representative of ALQC, repeatedly said the company had not started quarrying in the area and had been building only roads atop the community.

Residents refused to buy the explanation.

Cherry Candol, one of the protesters, said her cousin, Genaro Segovia, who worked as a watchman for ALQC, was among the dead in the landslide.

Candol said Segovia was at an ALQC bunkhouse to look after backhoe and other heavy equipment in the area the night before the landslide.

Residents displaced by the tragedy continued to get help.

The latest came from the Davao City government, which announced on Wednesday it was giving P2 million in aid.

Councilor Danilo Dayanghirang, chair of the city council’s finance and ways and means committees, said Mayor Sara Duterte had asked the city council to allocate funds for the landslide victims.

The Davao City government had already spent at least P50 million on aid to local government units reeling from disasters. —WITH A REPORT FROM FRINSTON LIM