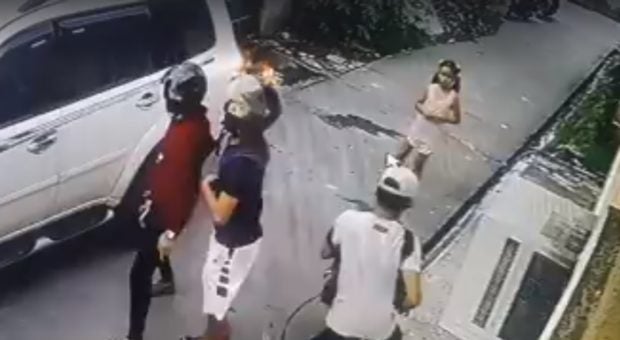 Offense seems to be the best defense for this little girl whose “fight instinct” kicked in following a hold-up scene in their family compound in Cavite.

The girl was seen in a video bravely chasing after several armed men despite the size and number disadvantage.

In a CCTV video uploaded on Facebook by a certain Bhing Minia, a little girl can be seen walking along a driveway as a white SUV pulls over.

Then seconds later two men came and casually walked by, drew their guns at the guy who just alighted from the vehicle and grabbed his belongings.

Two other helmet-wearing men, appearing to be the back-up and lookout men in the group, left their motorcycles and ran toward their companion to divest all the belongings from the male victim.
As the robbers flee, the little girl crossed their path and grabbed one of the men in an attempt to retrieve some of the stolen items.

When she was unsuccessful, she then ran after the men who hastily retreated to their motorcycles.

It could be seen that she bravely confronted the armed men by unleashing several blows but she was sideswiped by one of the motorcycles as the robbers were making good their escape.

Minia, who was the aunt of the girl, said that the hold-up incident happened at 4:50 p.m. on Thursday at a family compound in General Trias City in Cavite.

Minia told INQUIRER.net that the girl was hospitalized on Thursday because of sustained injuries. She is expected to go back home on Saturday.

In a separate CCTV footage, one of the men daringly entered one of the houses in the compound and took several things.

Minia said in her post that the armed men only got cash from their family and nothing grave happened on the family members.