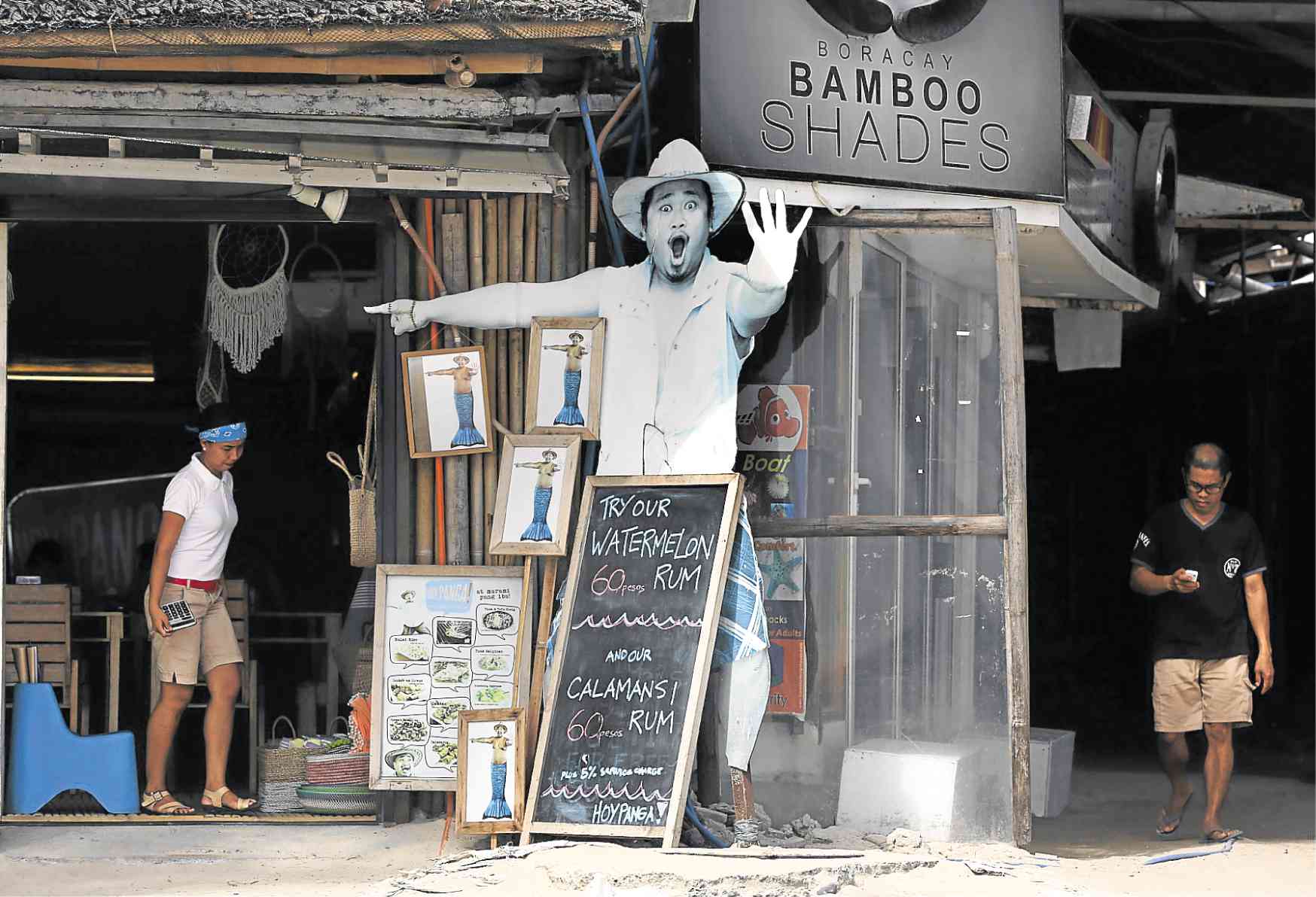 FAREWELL A restaurant in Boracay leaves a sign outside that seems to bid farewell to tourists days after the resort island was closed to tourism on orders of President Duterte. —LYN RILLON

ILOILO CITY — A month before Boracay Island reopens to tourists on Oct. 26, a group of displaced residents continued to protest the lack of a comprehensive plan to relocate people whose houses had been demolished and help those who lost jobs and means of income.

“For the past five months, we have been driven to worsening poverty forcing many of us to leave the island,” said Olive Abanera, spokesperson for the group We Are Boracay, at a press conference on Wednesday.

“Does the government want us to leave so big investors can come in?” she said.

They said they came to Iloilo City to air their gripes as government pronouncements had been focused on the physical rehabilitation of the island, especially the construction of the main road.

“We haven’t heard of a comprehensive plan for most of the residents who have been left jobless or without source of livelihood,” Abanera said.

She said the cash and financial assistance provided by the Department of Social Welfare and Development (DSWD) and Department of Labor and Employment (Dole) were not enough to sustain the needs of families during the six-month closure of the island, which had been described by President Duterte as one big cesspool.

Mary Ann Gatacelo, a member of the group, said there was still no ready relocation site for residents who had been ordered to leave wetlands and forest lands.

Heeding a recommendation of a Cabinet cluster, Mr. Duterte approved the island’s closure to tourists starting on April 6.

At least 30,000 employees of resorts, hotels, restaurants and other commercial establishments and those in the informal sector have been rendered jobless by the order.

Rebecca Geamala, DSWD Western Visayas director, said the department had released at least P136 million for residents who lost their sources of income.

She said officials were currently monitoring the implementation of livelihood programs.

The DSWD and Dole had also launched cash-for-work programs that provided jobs for three months for  P9,705 monthly.

Gemala said help would continue to be given to families even if they had not availed themselves  of the aid programs.

Abanera said some residents had not benefited from some of the aid programs, like allowing residents to sell rice, because residents consumed the supply because they had no income to buy.

The group has been pushing for continued government aid even after the island reopens to tourists because many residents could not instantly regain employment and livelihood sources.

She said only 25 establishments had been cleared by the government to operate when the island reopens.

“There will still be minimal tourists and most workers cannot yet return to work,” Abanera said.

“It is also doubtful if they can return to their previous work before the island was closed,” she added.

Public Works Secretary Mark Villar said on Tuesday that his department was rushing work on Boracay Circumferential Road to make this available by the time the island was reopened.

Since Boracay’s closure in April 6, the Department of Public Works and Highways  has so far managed to only pave a little over 1.1 kilometers of a one lane road and lay 2.9 km of drainage pipes in the island’s main highway stretching 4.1 km.

Villar blamed the delay on “incessant rains.” —WITH A REPORT FROM JOVIC YEE