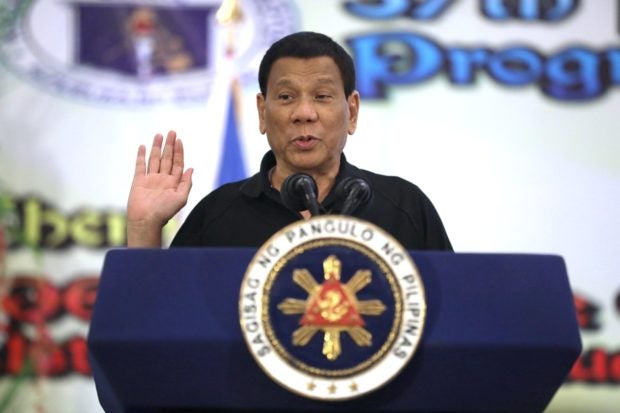 Blame it on drug addicts, again.

President Rodrigo Duterte on Thursday shared a theory that the rice shortage in the country could have been caused by drug addicts in rehabilitation centers who now enjoy eating food.

He said the number of drug addicts surrendering to authorities has been increasing and they have been undergoing rehabilitation.

Mr. Duterte, who launched a brutal war on illegal drugs since he assumed the Presidency in June 2016, said drug addicts used to be reed thin due to their drug addiction.

“Kumakain na ang mga u*** eh. So maybe next time ‘pag may crisis na naman na – you distribute shabu, kumain ‘yung iba para we can save rice for the others, especially the innocent and the good ones,” he said.

The President in early September denied that there was a rice shortage in the Philippines, saying the issue was just being politicized.  /kga

Read Next
Troublemaker in viral video in Ecija may face charges, cops say
EDITORS' PICK
Metro Manila to remain under COVID Alert Level 2 until December 15
IATF tightens border control, suspends entry of fully vaxxed nationals from ‘green’ countries
Legarda: Ending Violence Against Women, a cause for all
Duterte open to making jabs mandatory; Cabinet mulls ‘pressuring’ the unvaccinated
Villar Group gears up for AllValue Shopping Party on Dec. 3; around P 1-million promos and discounts up for grabs
A delightful blessing!
MOST READ
Quiboloy warns of ‘much worse than Omicron virus’ if his ‘persecution’ is not stopped
Bongbong Marcos’ conviction in tax case not a crime involving moral turpitude — lawyer
IATF tightens border control, suspends entry of fully vaxxed travelers from ‘green’ countries
Marcoleta defends pol ads on ABS-CBN
Don't miss out on the latest news and information.