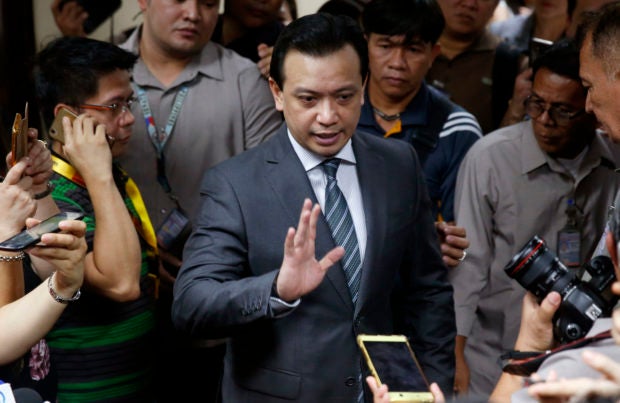 Oppositionist Sen. Antonio Trillanes IV talks to journalists outside his office in the Senate following the issuance of an arrest order by the Makati Regional Trial Court on Tuesday, Sept. 25, 2018. (Photo by BULLIT MARQUEZ / AP)

“He’s in no position to demand anything,” Trillanes said in a press briefing.

“Ngayon, kung ano man ang plano niyang gawin (Now, whatever he is planning to do), I expect the worst out of him; so, he can do whatever he wants,” he added.

Calida demanded an apology from the senator after the latter accused him of allegedly stealing his amnesty papers.

READ: Calida demands apology from Trillanes for calling him a ‘thief’

“Unless Mr. Trillanes expresses his sincere apology for calling me a thief, I shall be constrained to file a criminal case for libel plus damages against him,” the SolGen said.

Responding to the libel case threat, Trillanes said: “Kung magpa-file siya, gawin niya (If he wants to file, go ahead).”

“E trip niya ‘yan (Well that’s what he wants). So he can do whatever he wants,” the senator added.