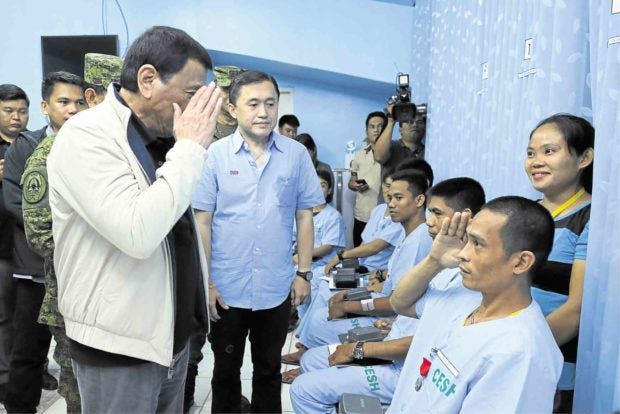 PRESIDENT’S HEROES President Duterte salutes one of the 17 Scout Rangers recuperating from wounds at a Jolo hospital suffered from a clash with Abu Sayyaf members in the town of Patikul, Sulu province. Seven Tausug men were killed in the clash and tagged as Abu Sayyaf men by the Army. Their relatives said they were just fruit pickers. —MALACAÑANG PHOTO

DAVAO CITY — Seven Tausug men killed in what the military said was a clash between soldiers and terrorists were civilians, according to results of an investigation by two human rights commissions.

The investigation results came as President Rodrigo Duterte gave medals to 17 Scout Rangers who were part of the group of soldiers being blamed for the Tausug men’s killing.

On Monday, the President visited the 17 wounded Scout Rangers at a hospital in Jolo, Sulu province, to pin medals and hand over .45-caliber pistols.

Jerome Succor Aba, spokesperson for the Moro group Suara Bangsamoro, said the visit only added to the pain of the men’s relatives.

The President’s visit to the soldiers became more controversial after findings made by the Commission on Human Rights and Human Rights Commission of the Autonomous Region in Muslim Mindanao showed that the slain men — aged 16 to 30 years old — were all civilians and not Abu Sayyaf members, as claimed by the military.

The two commissions had launched a joint probe of the killings.

Aba said Mr. Duterte’s visit was an attempt to “wash the blood off the hands of the offending soldiers.”

The families of the men said the seven had sought permission from soldiers to harvest fruits from their trees on the day they were arrested.

The military said the men were among some 70 members of Abu Sayyaf who clashed with a group of Scout Rangers belonging to Class 205-18 in the village of Bakong in Patikul town, Sulu.

Seventeen Scout Rangers suffered minor shrapnel wounds during the clash and brought to the Camp General Bautista Hospital in Jolo, Sulu, where the President visited them.

The military said the Scout Rangers, still students, were on a mission to get Radullan Sahiron and two other Abu Sayyaf leaders — Hajan Sawadjaan and Idang Susukan — in an area of Patikul with grid coordinates 51NTG8929270577.